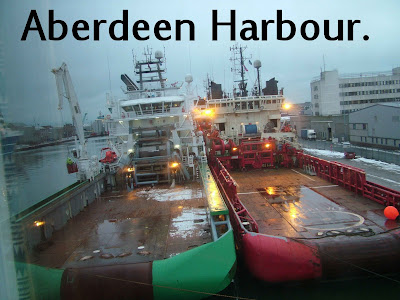 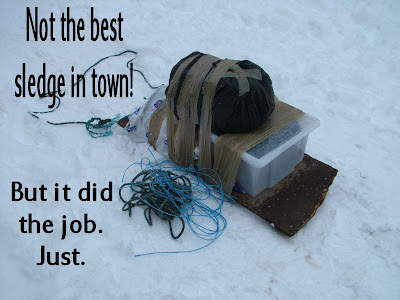 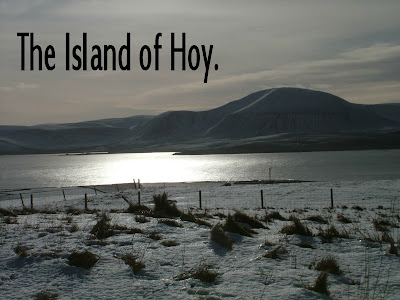 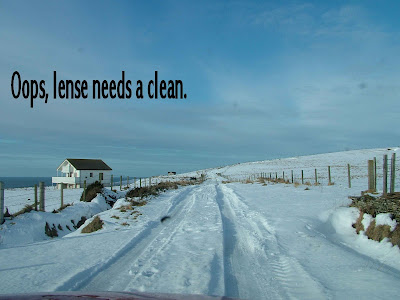 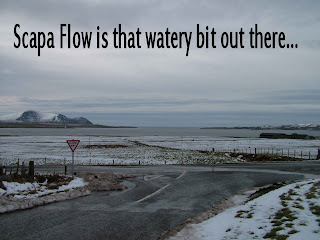 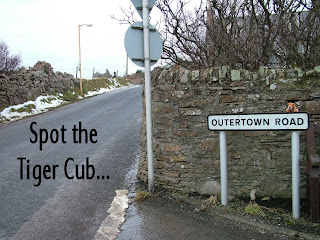 I thought the streets of Thurso looked familiar, and then I suddenly realised I'd been there a few years go. But I'm ahead of myself. Last Thursday morning, I loaded up my converted Cubbie ramp with three big packages containing all the clothes and work stuff I would need for a week, well wrapped in bags and bin liners, then between us, Mrs BC and I dragged the load up the drive. Then we went back for Cubbie. Me oh me, the driveway is quite steep when you're pulling or pushing a heavy load. With no wheel tracks in the deep snow it was impossible to ride the bike up there, so push it we did. We dragged the 'sledge' half way along the lane to where the terrain levelled out, then Mrs BC was under instruction to wait for me while I went back and got Cubbie. Turned the key, gave it a tickle and a kick and the beautiful little bike started. It wouldn't run too well though, but I think it was due to a lack of a choke - if I held the tickler button down for a while it kept it going until the engine warmed up enough to run more evenly. It only took a few minutes and soon we were slip-sliding along in the deep icy ruts. Somehow in the snow, the pot holes seem to be even deeper. Soon caught Mrs BC, who had disobeyed me and was nearly at the top of the hill with the sledge. Cubbie and I pop-pop-popped past her and we slid down the hill, my feet dragging in the snow acting as my only from of braking. The encroaching shrubbery on the verge cut and bashed my knuckles and even drew blood somewhere along the line. Shows why you should always wear gloves... Finally at the van, got all the stuff loaded and set off to Camerons, the local garage to have a new tyre fitted to the van. Big thanks to them for fitting me in at short notice. I was slightly early getting to Aberdeen ferry terminal, but checked in and they signalled to go straight on board. The crossing was 6 hours, and got a little choppy towards the mid point. I wasn't sure if I was hungry or sea sick, so I had supper with the Captain (well, at the table next to him) and felt all the better for it. Landed, or whatever the nautical term is, at Kirkwall a little late, some time near to midnight and headed straight to the B&B in Stenness, where the traditional Scottish greeting of food and drink was offered, and accepted of course. 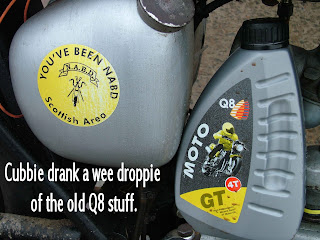 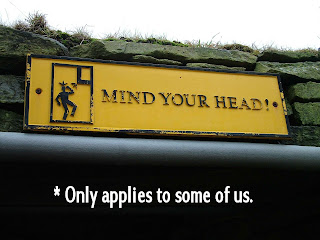 So, to the day of counting Cubbies. No hang on, that's not it. Counting counties? Well that's sort of right I suppose. Cubbies Counties hits the road again! I couldn't quite believe that I was on the island of Orkney, to the north of Scotland, and only 50 miles south of Greenland,in the middle of February, riding my Cub. Brilliant. I went to Skara Brae, a 4000 year old village, which I'm told was built by the folk who came across the sea from Caithness in their wee fishing boats. The guys and girls in the visitor centre were most helpful and informative, even though there was a howling gale going on outside - thanks to Ian, Diana and Margaret. 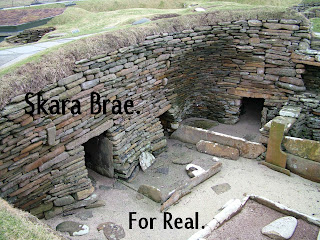 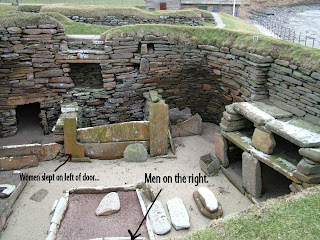 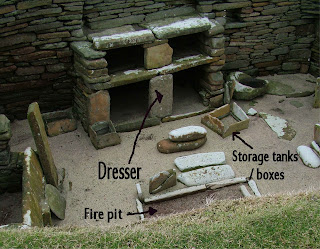 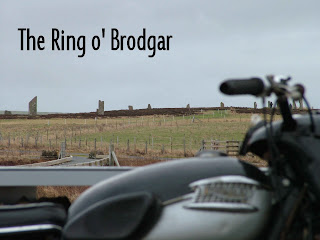 Also stopped off at the Ring of Brodgar, an absolutely stunning and atmospheric standing stone circle, followed by a call at the Stenness stone circle which is a bit smaller and in a field with some sheep, but I'm used to sheep so I didn't mind. Met up with a couple of local classic bikers, Donnie and Mark - both of whom seem very involved in the vintage vehicle club on the island, hopefully we (me and any club members who fancy a trip abroad) can go back sometime and partake of their annual show or even just meet up for chitter chatter. 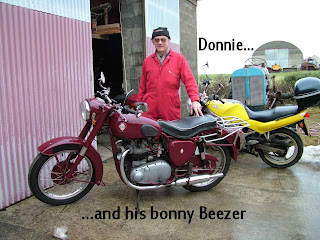 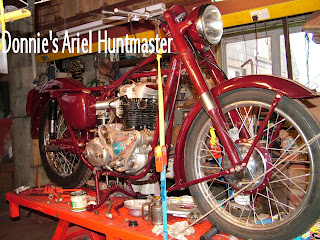 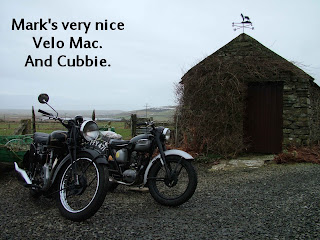 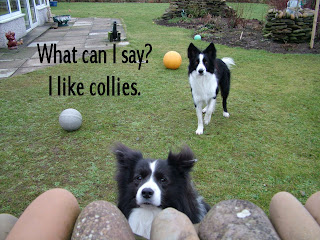 They are Mark's too.

**I shall add a bit more info about their bikes when I get a tad more time.

Now, steel yourselves, I'm about to tell you of an experience that is not open to just anyone who visits Orkney. Virtual slalom skiing in a church hall. Now there's a thing. Have you heard of that before? I would like to thank my coach Penny, and her two collie dogs (their names have escaped me for now but they'll come back to me...Tess? And...N...Nel maybe? Oh dear, I was determined to remember!) for all the encouragement and support. And laughter! I think the dogs were more keen on my throwing their ball for them, bless. The B&B I stayed in, "Cromlech", Stenness, was one of those lovely, homely, comfortable places, run by Lilias and Alfie, though to be fair, I think Lilias does most of the running - she certainly does the cooking, and very nice my brekky was too. Sausages...mushrooms...tomatoes...and bacon....toast...homemade rhubarb jam...honey....homemade oatcakes.... Not all on the one plate, you understand. Oh yes, nearly forgot, I was invited to the local ploughing match awards ceremony one evening, which was followed by a dance. Lilias did her best to find any local classic bikers but they seemed to be few and far between in the ploughing world. Oh, and guess what? I personally, escorted a new tractor to the island, which then took part in the ploughing competition. Oh yes, must thank the postie who insisted he show me how to get to one of the addresses I was looking for, when it would have been funny to draw me a map and send me off into the darkness! 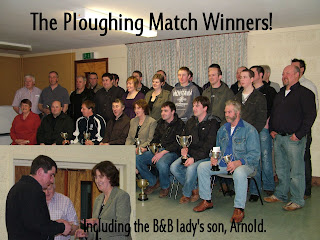 For the home leg, I decided to take the shorter ferry crossing from Stromness to Scrabster (Thurso) but that meant I then had a 6 hour drive to get home. Usually it would be a nice coastal sight seeing drive but it was dark by the time the boat got in. So that's me all unpacked and ready to go again, think I need to attend to Cubbie's primary chain case before the next adventure, most of the oil that I put in there ended up on some fancy flagstones and people's driveways. 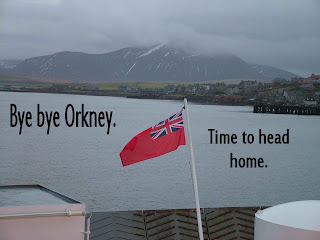 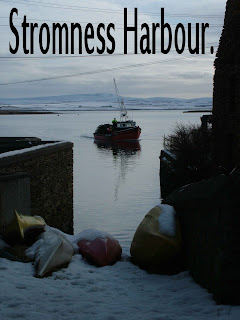 So, what do you think of all that for just one county then, eh? Hmmm?

Pics to follow too, but we've got to go get some more hay in tomorrow. 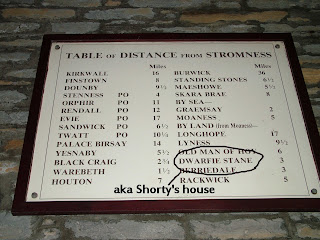 Posted by Gorgeous Biker Chick at 19:29

19 of 33 and you hope to finish by May? I hope the weather improves substantially and quickly for you!

I hope it goes better than you hope and with less work than expected!

Thank you BC, looking forward to meeting up with you and your BC to do the Lothians.

Sounds like an outstanding trip.
So the counties are being counted done quickly now?
I've been in Greenland in February, so being 50 miles south on a bike seems a bit.....loonie.

well done indeed ... orkney was always going to be a challenge ....the rest will be easy lololol .... well maybe not.
Good read as always BC

Hope you manage all the Counties by your deadline

Just noticed the Winter slideshow,think the sidecar facing up the lane looks great.

Kawa, I am literally just about to post the pics. Glad you like the competition ones in slideshow format, hopefully Judge Phil will get a better view of them all together.

Bob thats a four letter word,BC dosen't use such words.Not yet anyway lol

Great pics BC,well worth the wait

Beautiful pictures. Skara Brae is one of those places I've aways wanted to visit. The history there is amazing.
Oh, and such a cute Tiger Cub, resting his weary body on the sign.
So Cubbie survived the endeavor in one piece? Nice.

No one in particular, Shorty.

Thanks for the comments chaps, good to have you all on board.

Maybe it's my wanderlust but I Reeaalllly like those pics...nice job.

What an incentive for all us young wannabe adventure motorcyclists. An excellent read, a girt big thanks to you.

We need photocomp results Ms BC,tensions getting too much, lol

My, my, what an impatient lad you are Kawa. Chill. Go out on your bike and take in the view. Little grey tractors rule, by the way!

Take it you like it Mrs BC,that's the closest to one I can find for now.

Went out to get Bantam bits today and came back with more than I expected,but thats another story.Would just like to say thanks to BC for her kind? words about it

Yes, I thought it was cute,thankyou. Never seen one that small before! B.C is always kind. Sometimes misunderstood, but always kind.