Well, thats the new Cub Mag bank account set up, all approved and apparently I'm digitally verified or something, yay. And I've managed to find the workbench in the shed, it was hiding under a pile of chop saws and batteries and chargers and the like. And, as if that wasn't enough, I took this lil snap of the beautiful sunset when I was in Edinburgh a week or two ago. 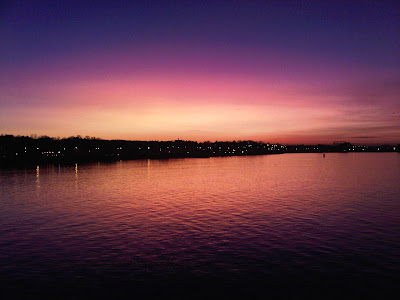 Enjoy. And send me some pics of Tiger Cubs and Terriors please!
Posted by Gorgeous Biker Chick at 18:16 5 comments:

By the time the Loadall had run up and down the drive and through the fields, turning with its rear wheel steering, in narrow gateways, the place was in a bit of a muddy mess, so we thought that if we got the man with the mini digger in to scrape off the surface mud that had been transferred onto the drive, it would help to sort things out. We also thought he'd be able to fill in the ruts in the fields, but the weather wasn't kind and it rained all day, and as he scraped just a weeny bit more off the drive than we would have liked, the mud got worse. So we set him to work on the ruts in the field, which he managed to do something with, but some still needed the attention of a spade and a pair of wellies. Having been up to our ears in mud for couple of days - which was a couple too many, we were going through the options of how and where to get some stones - this still being in the Hogmany holidays. Nowhere was open. A call to a friend who lives near the local quarry and who's husband just so happens to know the guy who drives the lorry, set the delivery and spreading of a lot of "inch-down" and another mini digger with another driver, in motion. Inch-down is a stoney/dusty mix that should soak up the mud and bed down and set nice and solid. I went to collect Peter and the mini digger, and he continued the mud scraping exercise on the rest of the drive, and a little while later, Jim the driver arrived with the first 10tonnes of stone, which Peter duly spread with the digger. It was originally estimated that 10tonnes would do, but then we thought 20 would be better. That hardly covered from the front to back door, so we had a third delivery, which got us to the bottom gate, and then we were sure that one last load would do it, but it was clear when that arrived that we would need....another 10tonnes. In total, we had 60tonnes of the stuff, and about 20tonnes of that was spread, shovelled, barrowed and levelled by hand - thanks Muckle Flugga Man. We've since borrowed a whacker device from a neighbour, but there's been nothing but hard frost since - and you can't whack when it's frosty. Looks good for tomorrow though, a bit rainy just now which has thawed the remaining frost pockets. 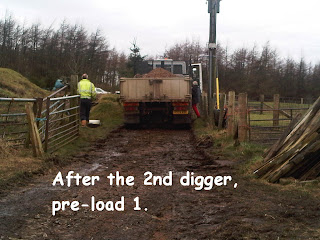 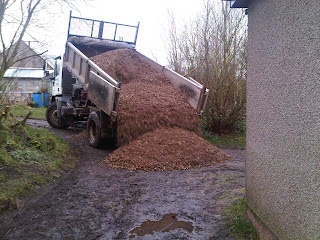 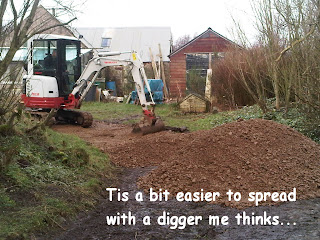 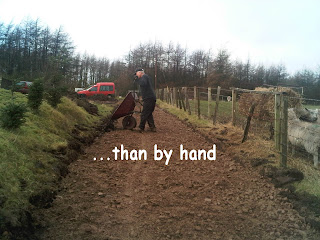 And did I mention that while we had the Loadall, we shifted a couple of old vans that have been gathering rust for a few too many years? I'm surprised that bit of it went as well as it did, you've only got to look at the pics to see it was a bit of a tricky job getting them from their tucked away little parking spaces to the two trailers we had to borrow. 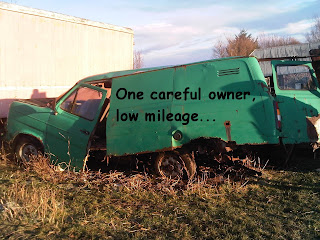 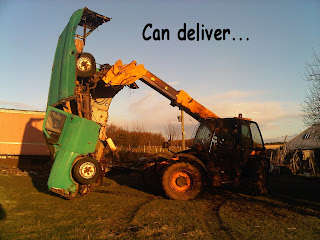 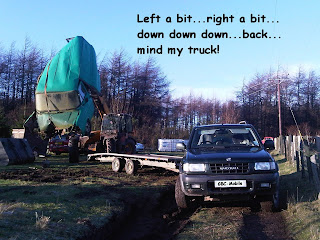 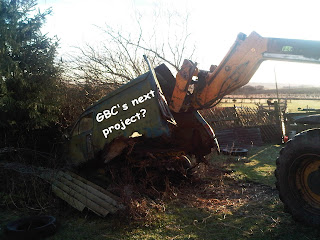 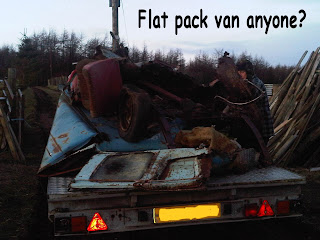 Some of you might have heard about the new Scottish bike show, to be held at Lanark on 12/13th May this year. I was considering the idea of having a bit of a Cub get together there - it would make an ideal venue to showcase our Cubs to a new audience, and maybe even meet a few 'like minded' types. The deal from the organisers is a FREE 16 square meter plot indoors, which would give us room for a selection of different models - not scantily clad stick insects, I was thinking more Sports / Mountain / Trials Cubs etc and not forgetting the Terrier, and perhaps some sort of project on the bench, so that people can see the mad things that we Cubbers do!

Might even manage to hook up a slide show with Cub rides and activies shown on a screen - would probably be a charge for an electric hook up, but if the 'Fest' takes off, I can find out more.
I'm sure there are a goodly number of Cub owners in Scotland or the north of England who would relish a weekend away at a bike show, talking bikes, looking at other bikes and generally having a good old time. Being May, the weather might be nice and we could even attept to organise a BBQ for Cub Fest Partakees and Friends.

Any thoughts on this are most welcome, either leave a comment by clicking on the 'comment' link under this post, or email me gbc AT thecubmag.com. If you fancy taking your bike along or helping out by manning the stand for a couple of hours each day, then that would be much appreciated. Contact me in the same way.
Posted by Gorgeous Biker Chick at 12:01 5 comments:

....So there we were, digging this hole, which was to be for the inspection pit in the new concrete sectional shed. Well, actually, 'we' didn't dig it, the mini digger man dug it, in the snow, a few weeks back. Luckily, it hasn't really snowed much since then, and the pit has remained covered up with tin sheets and anything else that would stop Star the not-overly-bright-Collie from falling in it. Last Wednesday, the Man from Muckle Flugga came round and started the concreting of the pit floor. There was a small pile of sandy ballast left over from the last shed build, half way up the drive (the lorry driver got stuck so just dumped it there), so some of that was barrowed down to the site and after clearing out the mini-landslip in the bottom of the pit, a few loads were mixed up and dropped into the pit. While the MFMF was busy concreting himself into a corner, I was up a ladder fixing the roof on Cubbie's shed. One of the corners of the box profile sheet had somehow come lose, and was flapping around in the rather stiff breeze. Luckily it had survived the recent storms that we had earlier in December. The problem was that the plank that that the sheeting was screwed into was so rotten that the screws weren't holding, so after a quick scout around the 'timber recycling pile' I found a suitable replacement, chopped it to size and fixed the roof back down. Sorted. Meanwhile, someone had left some footprints in the wet concrete.... 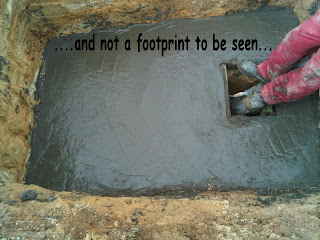 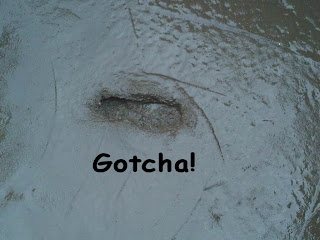 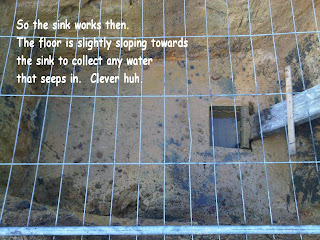 (A couple of days later...)
So with the pit floor sorted, the next step will be to pop a few rows of blocks up for the walls and back fill the gap between the blocks and the rest of the world, with some concrete. But that's for later. Moving swiftly on to New Years Eve, and a handy contact in the world of 'big diggers' had agreed to lend us a JCB Loadall, and it was delivered to Cubbie Towers at early o'clock. A rather useful bit of kit, it would surely make shifting the huge pile of spoil a lot easier than a wheelbarrow... 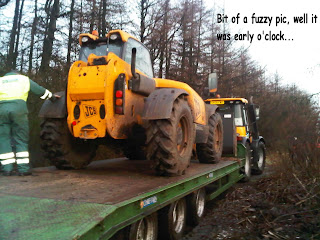 The first pile to be shifted was nice, healthy dark top soil, which had to be carted right through every field we've got, up to the top of the farm, then back down to the bottom and back up half way again, to Mrs BC's veggie garden, and when that was gone, it was time to move the thick, orange clay that was heaped up on the far side of the shed base area. Easier said than done really, as there's the small matter of the whopping great big hole in the middle, aka the inspection pit. 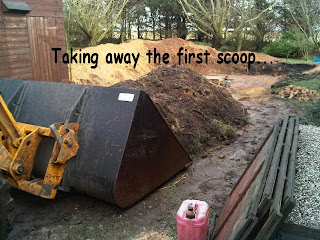 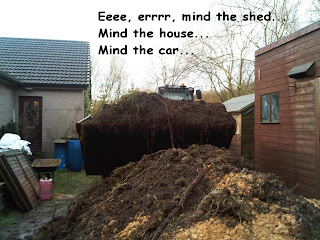 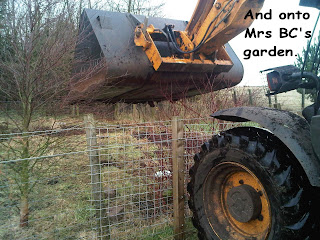 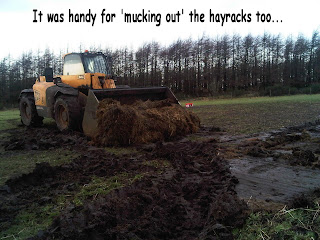 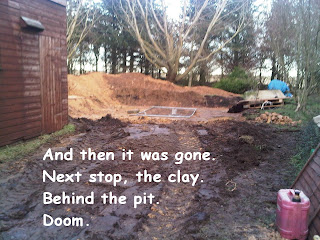 New Years Day: Being ever so careful to avoid dropping the Loadall in for an inspection, TMFMF set about shovelling up the clay and dumping it in one of the fields to make a bit of a sheep shelter. Unfortunately, being the middle of winter, and having had quite a lot of overnight rain, it meant that the big heavy beast of a JCB cut into the ground rather a lot, and after just a few loads it was decided that it would be better to dump the spoil on a patch of waste ground, that wouldn't involve running back and forth through the fields. That was a doubly good thing 'cos it also meant each load could be dumped in half the time, and I didn't have to keep running around opening and closing gates and keeping sheep in the right fields. It's certainly been a great help having the machine in to shift the spoil, but more or less every load has had to be supplemented with hand lifted shovel-fulls of heavy, sodden, half set clay, which let me tell ya, is no way to spend New Years Day! But hey, it's all going to be worth it when the muck is cleared, the ruts have healed up and the shed starts to be built. Can't wait. Oh, and before I forget to tell you, it looks like I might be getting my paws on another plunger Cub frame in a few months! 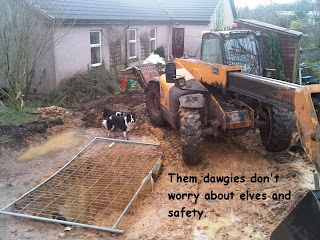 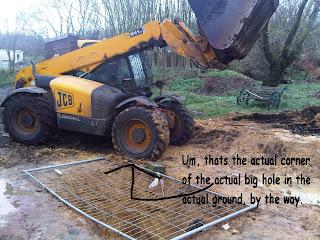 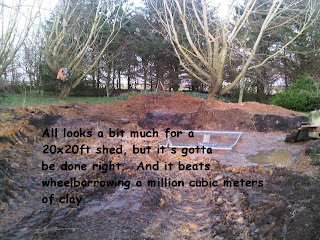 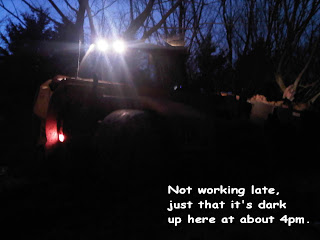 We've only got the Loadall until Wednesday, so hopefully the weather tomorrow will be nice and frosty, and we can finish off the earth shifting and maybe even get the mini digger man back to help tidy up and then.....maybe.....on Tuesday....maybe the block work could go up in the pit....maybe....oh yes, there's a tree to plant too, one that had to come out when the base was dug out.

And before I take my weary body off to the land of nod, I'd like to say thanks to one and all for the good wishes received by email, text or Fleecebook, and thanks for your continued interest and support in all things GBC and Cubbie over the years. I hope you'll continue to 'watch this space' for more madcap adventures and sheep tails. Tales. Sorry. HAPPY NEW YEAR BLOGGERS!!!!!
Posted by Gorgeous Biker Chick at 19:33 8 comments: