Well I was one lucky girl this year, receiving 2 pairs of wonderfully warm and cosy boots, some gloves (which always come in handy, boom boom), a rather brilliant hat and scarf hand made by a friend of Mrs BC, which isn't my usual style at all, but there's just something about it that I love. A joint pressie for Cubbie Towers came in the form of a DVD recorder, but we've now discovered that we have to watch the same channel as we're recording, which rather negates the whole point of finally having a DVD recorder. I'm wondering if it's because it also contains all the Freeview gizmos which we previously had to use the set top box for, and if there is a way of hooking up the old set top box as well as the DVD recorder, so that two different channels can be received at the same time. Mrs BC has gone all technical, with a DAB radio and wait for it....one of those MP3 player thingies! Somehow, Santa managed to fit a hammer drill down the chimney, along with a helmet cam - you just wait for some new 'Cubbie / Terry Tours Scotland' videos. Two other pressies that will aid in the filming process are a natty new neck tube that turns into a hat, and, yes, wait for it, an upside down map. I mean, please? An upside down map? I'm a girl, don't people know girls can read maps the right way up! Tis a bit funny though, finding the south coast of England where the north coast of Scotland should be, and all the place names the right way up. So, what did you get? 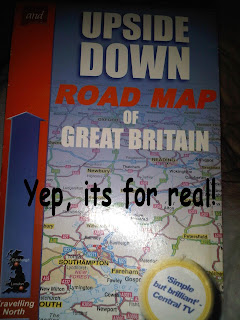 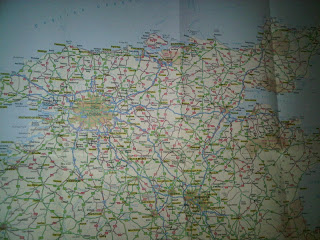 Go on, click on the map pic and see for yourself, weird!!!
Posted by Gorgeous Biker Chick at 19:03 8 comments:

Did a little surgery on young Dennis the Dorset sheep today. One of his horns was dangerously close to his eye, and after a suspected bit of fisticuffs (or whatever the sheep equiv is) with Solly the Soay, the horn ended up poking poor Dennis in the eye. So it was out with the hacksaw blade and after a very painful few minutes for the lad, with the horn being pushed and poked and shoved into his eye even more, Dr GBC soon sorted it out. And no blood. And hope you all had a great Crimbo day. 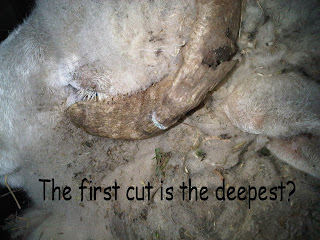 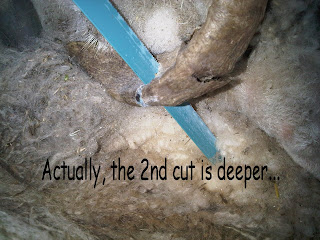 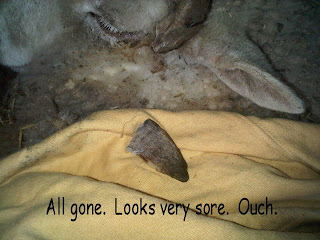 Wot, no festive wishes? Oh go on then...

Wishing all you bloggers a Very Merry Christmas and a stunningly wonderful New Year, may it be full of sunny fun filled motorcycle riding days and adventures and loads of new and interesting motorcycle magazines to read. Well, actually, hey, you only need one new motorcycle mag really, doncha? And I bet I know which one you'll all be asking Santa for....The Cub Mag!!!

If you pop back over the hols, you might find something of interest; maybe some shed building, or shed clearing out to facilitate a little bit of bike building, or maybe fitting a new kitchen door, shovelling snow, painting the kitchen, oh, who knows, there'll be festive times a plenty at Cubbie Towers!
Posted by Gorgeous Biker Chick at 15:46 5 comments:

After a couple of hours on Sunday, the Digger Man ran out of diesel and went home. Personally, I think it was more likely that he wanted to go and thaw out, cos it was a bit chilly and it hardly stopped snowing all the time he was working. As soon as he'd gone, that's when it did stop. Monday morning was fun; a guy came to buy some of the lambs, so they had to be caught and penned up in the hurdles, which we first had to drag across the fields of snow. We got the girl lambs caught first, with the aid of some feed in their trough, which we moved into the hurdled off area. That was easy enough but keeping the little critters in, that was another story! Every time a lump of snow fell from a tree at the end of the field, they all took flight and barged the weak point in the hurdles, almost succeeding in breaking free on one attempt. While I kept an eye on them, Mrs BC went and caught the boy lambs up in another field, using the same sneaky technique. By this time, the Digger Man had arrived, and work was under way, and then Tony the Shearer, whom we shall now refer to as Tony the Lamb Buyer, turned up an hour or so late, much to his usual form! With the sheep all wormed, injected and treated for things they haven't got but might get when they leave the sanctury of the farm for pastures new, they were loaded into his trailer and the deal was done. Tony set off down the slippery snow covered icy hill, and we went to see what the Digger Man had managed to do in his next two hours. Oh. My. Goodness. That's a mighty large hole in the garden. And that's an even mightier pile of spoil we've now got to re-home. Did I mention that the plan with this shed is to have an inspection pit in it? Always wanted one, and never had the chance to be able to 'make' one before. Seeing as it was partly the Man from Muckle Flugga's idea to get the mini digger in, it's also down to him to beg / borrow / steal (no, don't really mean 'steal', not as in 'break the law') or acquire some sort of machine to shift the mountain of spoil, cos none of us are relishing the thought of moving it with a wheel barrow! 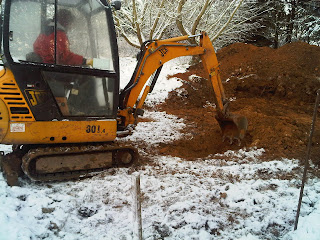 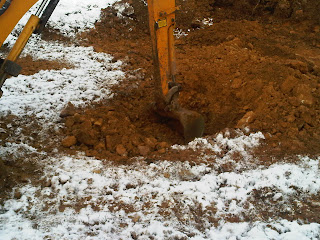 Just a wee scoop to see if we'd hit the soak away from the gutters round the house. No, is the answer, nor did we find any oil or gold or anything interesting. 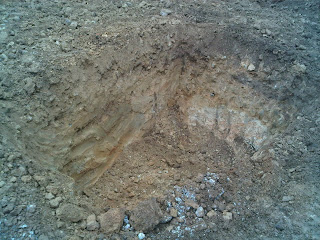 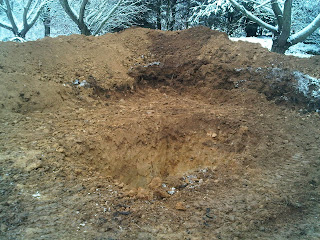 Nearly deep enough, but needs to be a little longer and wider...... 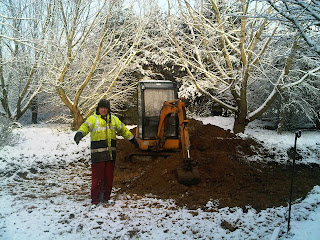 "What, about this big for the pit?" 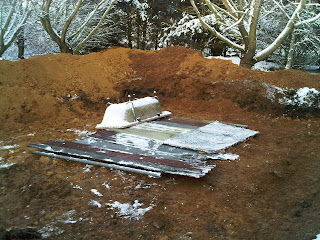 Er, yeah, ok then, that's probably big enough now! Thought we'd better cover it up before the cats, dogs and small sheep fell into it. 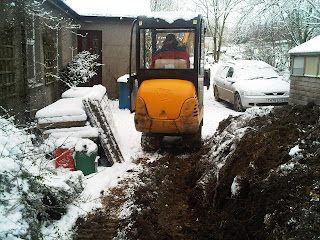 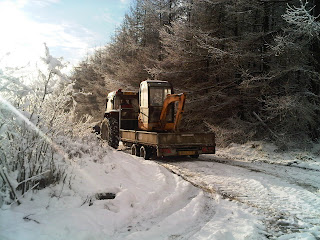 Thats it, dig a huge hole and then clear off!
Well, that's the first stage done and dusted with snow. Next up (after moving the mountain out of the way) we need to get some shuttering up and investigate the best option for the base. Do we mix it ourselves? It's not much bigger than the previous Cubbie Shed base which Mrs BC and I mixed up and laid a few years back, or do we try and get a ready mix company with a small enough lorry to deliver the gloop straight in? At this time of year, it's gonna be tricky getting lorries and big loads up the hill, down the drive and back up the drive again.
Posted by Gorgeous Biker Chick at 10:02 8 comments:

A Day of Rest.

Digger man coming tomorrow to scoop out the base for the shed. Snow also due tomorrow.

I didn't see any point in starting a new post about the same subject, so here are a few pics from the digger work today - woke up to a blanket of white stuff everywhere, but the digger man still managed to get his transit van and trailer up the steep hill to Cubbie Towers. He managed a couple of hours work in almost constant snow, then ran out of diesel! So he nipped off home and will be back tomorrow to finish the job. If only I hadn't given my spare can to the hay delivery chappie on Friday. 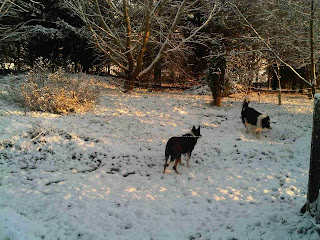 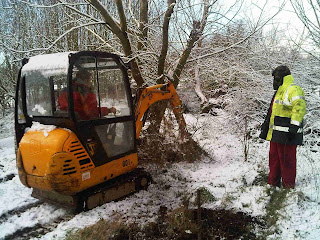 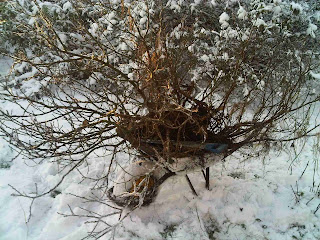 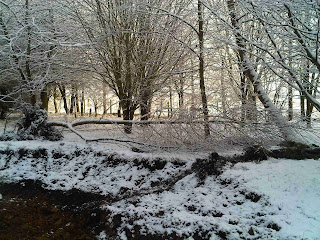 Which was so huge it had to be chopped in half for re-planting. Followed by two birch trees and a conifer. 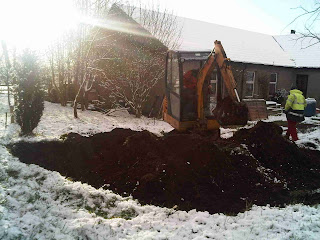 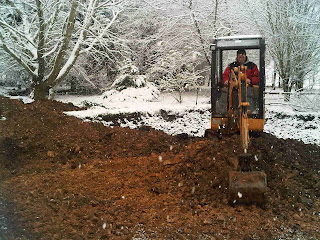 Nice, dark top soil, handy for the garden............then down to the very stoney, sandy stuff. Would have taken more than a couple of hours to get to this stage with a shovel and pick. 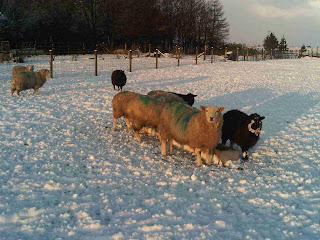 And finally, some frozen woolly faces.
Posted by Gorgeous Biker Chick at 10:54 2 comments: