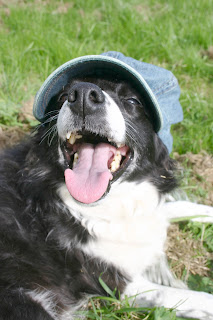 Yesterday has to have been one of the longest days of my life so far. I was having brekky at a posh hotel in Edinburgh, just before day 2 of a really interesting briefing (ahem) started, and Mrs BC phoned to say that my little collie dog, Jen, was poorly. Well of course, I wanted to come straight home, cos she misses me at the best of times when I'm away, so imagine her being poorly and wondering where I was. Still, if I'd hopped on a train then I would have had to back on another briefing - and believe me, once in enough. Luckily it was only a half day but the hours dragged by. I kept my phone on, much to the annoyance of the briefing managed, just in case Mrs BC had to get in touch, but no news. As soon as we were finished, I gulped my lunch down and headed for the train station. Three hours on the train, then the rush hour traffic through Aberdeen!!!!! Finally got home about 6pm, and my poor wee Jen couldn't even wag her tail to greet me. Called the vet right away but when she got here, she did a few tests and advised getting Jen to the surgery to be put on a drip. With a temp of 106, the extra fluids would help bring it down by flushing the body through. Rosie the vet reckons Jen is suffering from Pyometra which is a rather nasty case of pus in the uterus. We rushed her in and I was pleased that even though it was gone 8pm by then, the head vet Hamish had left a meeting and was waiting for us. He hooked her up to a drip, and made her comfy in a kennel. There are only few things that I can think of that are worse than having to say goodbye to a pet you've had for 15 years under these circumstances. She looked up as I patted her and left. Tears? You bet, bucketfuls. This morning I called to see how she was, and Rosie said she'd got through the night but if anything, seemed a wee bit worse. Blood tests and an ultrascan and now underway, results should take a couple of hours. Fingers crossed for Jen.


On a more cheery note, while I was staying in Edinburgh, John from Bikeshite.com who lives down that way made the effort to toddle into town on his Yamamamamahahahaha in the pouring rain at rush hour! Had he not got lost several times we would have had more time for a chat, but as it was, I was heading out for dinner and he had to get back to do his house husband duties, as his good lady, Star, was slightly under the weather. Thanks for the chocolate John.


And finishing off with a sad note. The vet phoned a bit later to say Jen had died while they were doing some tests. It was probably her liver that had come to the end. RIP little Jen.
Posted by Gorgeous Biker Chick at 09:37 1 comment:

Whats on this year?

Well I've been having a think about this year, where to go, what to do. I'd like to go to some of the shows / rallies I haven't been able to get to before, and then of course there's Cubbie's Counties...more on that one later. The Scottish Vintage Vehicle Federation produce a handy book each year listing all the car, bike, tractor etc events in Scotland. This won't be released until the beginning of Feb but a few dates have been whispered to me on the grape vine already.

Roll on March when the BIG show at Ingliston takes place, I hope to be exhibiting Cubbie this year, and I might even buy a new pair of summer gloves. Everyone goes on about the cheap prices at these big shows but I can never find anything that I like. By the time April gets here, our 2nd Large Lunch will be the blob on the calendar we're all looking forward to - first proper club ride of the season.
I believe there's also an Autojumble somewhere in Perthshire, might bag a bargain or two, or not. May - Cairn o' Mount - the famous run over the Cairn in guaranteed glorious weather. I might actually get to ride in it, rather than just to it, this year. June - ooh the Shetland show, can't wait to get back there, lovely place 'n' lovely people, got sunburn last time! I've got no dates for anything between then and September when a few of us might head down to the Lake District for a VMCC event, the week before the Grampian Classic MCs inaugural Road Safety Run, and then in October, it looks like I might be off to Spain! I've been toying with the idea of going to the Moto Piston rally and have nearly, almost, 99% decided that I will go this year. Possibly. Fingers crossed.

Well thats the list so far, and when I get my paws on the SVVF book I'll be able to plot the year more fully. Then I've got the GCMCC club events to sort out, lunch runs, evening runs, speakers, weekend trips.....Looks like it will be a busy one again, but heck, gotta do these things before the Gov stops us riding old bikes...

And on that note, ciao for now.

PS, just been outside to make room in the steading for the Cubbie Surgery....and its bleedin' cold! By the time I'd wired the plug for the light, my fingers and toes were just about falling off. Cubby can wait a while longer!
Posted by Gorgeous Biker Chick at 18:15 1 comment:

Not much to say really... 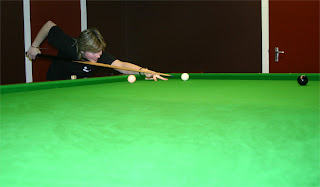 Not much to report this time, apart from our club night last Tuesday which was a chuckle. Our pool night is becoming quite popular with the chaps getting very competitive! The prize this year was a pile of bike cleaning stuff, perfect for the avid polishers amongst us. The winner was Andy, a potential new member who obviously had a very misspent youth! He might have won the "pot as many balls as you can" part of things, but I bet he wishes he hadn't challenged me to a proper game of snooker - see me there in the pic, just about to tickle the blue in before going on to win the game. No, honest, I did win! I have 12 witnesses!

Snapped up a bargain at Makro yesterday - a neat little bike lift for under fifty squid. It'll need a few mods to make it Cub friendly but hopefully it will make working on the bike a bitty easier. Talking of which, Cubbie bits arrived today so hope to get that gear box sorted very soon. I'm missing my Cubbie :-(.