Ooh, we're getting somewhere, albeit, nowhere particularly fast, but at least with that plunger unit removed I can have a think about what to do next. Had a spare 10mins after finally getting the 4x4 back together and noise-less yesterday, so had a closer look at the plunger set up. I had made up my mind to replace the springs anyway, as they had suffered a lot of heat in a bid to get the thing undone, but then in a fit of temper, I had attacked one of the shrouds - actually, it wasn't really a tantrum, but I thought if I could expose more of the spring, I could perhaps compress it and then get the mole grips or similar, on the rod which would give me a better grip than the broken screw slot. But it didn't work, because I couldn't get enough of the shroud out of the way. Anyway, that's not the problem. The problem is at the end where the rod screws into the frame. The Tractor Fixing Man pointed out that the thread isn't up to much inside the 'lug' on the frame, and I see now what he meant, but the odd thing is, the 'lug' on the other side of the frame, is larger - no wonder that plunger had already been removed, it probably just fell out! I haven't measured it in a very technical manner, just stuck the digi-measuring-thingy on it, and the left side is 13.7mm and the right side is 15.4mm. So have you got any suggestions as to how I can get the two lugs tapped and made to match the size and thread of the new rods that I'll need to buy? 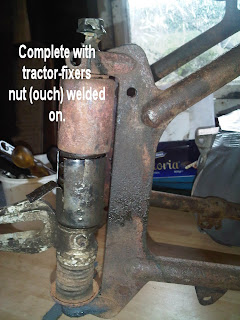 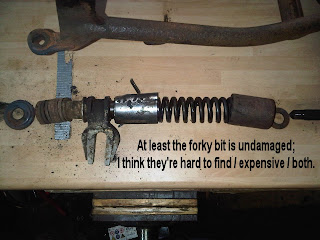 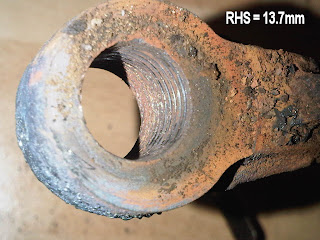 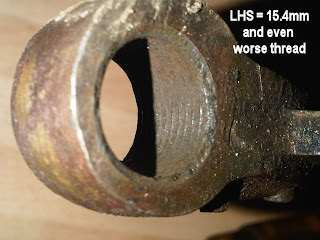 Oooh!!!! Exciting news people!!!! Took my Terrier frame to the local tractor fixing man, he hummed and haaa'd and did that sucking air through teeth thing, said he wouldn't be able to do it today so I left it with him. 20mins later, got a text saying it was ready for collection. A simple fix, weld a nut on the top and undo it. Bingo. PS, must learn to weld. Seems to be a multi-use skill for farm yard and bike building alike.
Posted by Gorgeous Biker Chick at 12:42 3 comments:

Yep, sorry, I've not been keeping up with the blog much lately, I do apologise. But...and there is always a 'but', I've got good reason. That 4x4 has been causing some headache, with an unidentifiable noise, which was then identified as a wheel bearing, so that was then followed by a search for the right one, which I eventually found....but then when the hub etc was rebuilt, the darn thing still didn't fit. The problem was that the drive shaft wouldn't come far enough through the stub axle to get the circlip back on. It was only by chance that the drive shaft then kinda got kinda 'stuck' and it was decided that the next step was to open the CV boot up and examine the joint, in case it was damaged. It didn't look damaged, so next the plan was to remove the drive shaft completely. Well, not having the correct Haynes manual for it made the job a little harder, for example, when it said to remove the 4 bolts that hold the drive shaft in place and simply withdraw the unit, it was discovered that the unit cannot be withdrawn. One reason being that the steering knuckle to come off too, so it was a chance for the Big Hammer to be used to aid splitting the ball joints. That, along with copious heat and constant hitting freed the knuckle and as it was pulled off, all the needle rollers inside it, fell out. Ah, the source of the noise, perhaps? I'm sure.

The next step was to post messages for help on the Frontera forum, where the guys helped with information and advice. The state of the bearing inside the knuckle was so poor that it was hard to see which bits of seal, washer and other bits of metal had to be removed. In the end, I took the unit down to the local tractor fixing guy, who attacked it with a special hooky tool and his welding torch and soon had the remains of the bearing on the bench. I'd fired off several emails to suppliers and one of them had come up good, Autovaux. They priced up the bearing kit (the whole kit inc P&P was nearly £50, ouch) and said they'd post it out ASAP. I also got prices for new balljoints, top and bottom, but they were twice the price of a company called Milner Off Road. Two days later, both orders arrived, so tomorrow, Saturday, is the day of the rebuild, again. Just hope this cures it and the truck can be put back on the road after, erm, about 4 weeks in the sick bay. 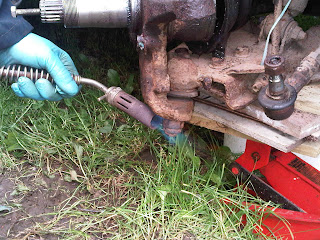 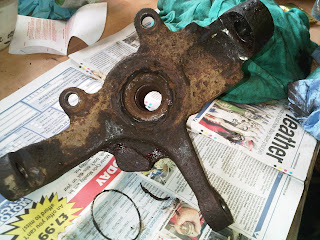 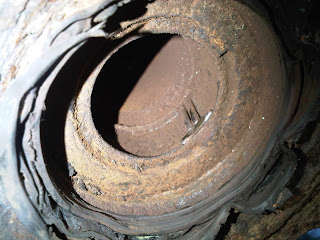 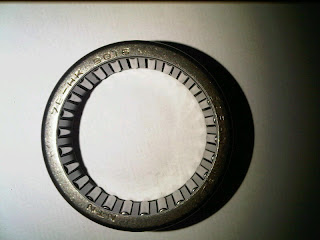 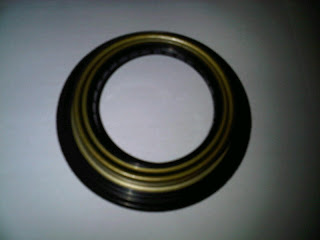 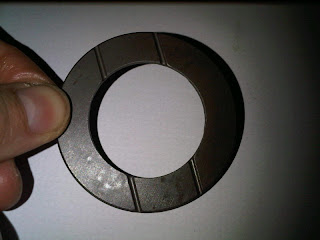 The seal however was a stunning £17!

In between truck fixing, a couple of attempts have been made to remove Terry the Terrier's stuck plunger unit. This one though, is proving a tough little devil. All that's been done is a good application of a concoction of nail varnish remover (aka acetone) and ATF (automatic transmission fluid), kindly recommended to me by a fellow VMCCer who saw my Scottish Column in the VMCC mag, where I was moaning about not being able to move on with work on the Terrier, more heat, and more violence. Nothing has moved though, other than half of the screw head which has parted company, so for now, I've taken the frame down to the tractor fixing man and we'll see if he has any magic tools to assist. 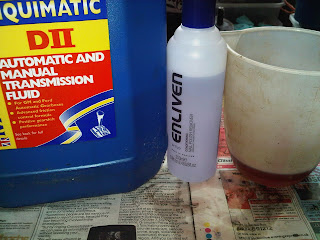 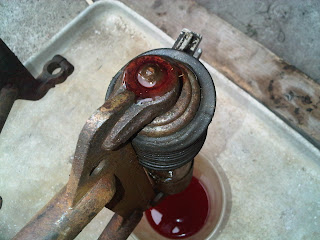 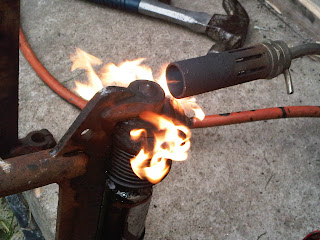 ...and then set fire to it. Don't worry, thats not the gas line being set alight!

Besides the mechanical works, there have been one or several additions to the fleecy flock at Cubbie Towers. Two little Ryeland ewes called Nel and Gwyn, and two whopping great big Ofxord ewes whom I think we're going to get away with calling Morse and Lewis... 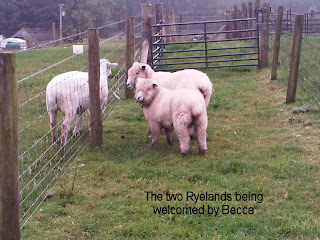 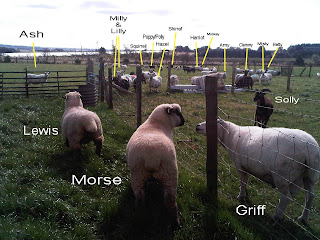 Pics would have been added then posted but last night the car had an electrical hitch so I've been working on that this morning, but no joy! GRRRRRRR!!!

**Added some pics for your entertainment. The car however, is another entertaining story. It's now Saturday, and after going to test drive a replacement car, work commenced on the 4x4 once more. Then rain stopped play, so it was time to put the poorly strimmer on the bench and take the carb apart. Got a good healthy spark but no go-go. Gave it a whizz out with the compressor, put it back together, still no go-go. I do hope things aren't going to keep braking this winter!
Posted by Gorgeous Biker Chick at 10:05 4 comments:

Yep, well thats me! Just home from my second stint at work today, firstly in Aberdeen then home to collect something, then back out to Huntly. Mrs BC's just getting me some tea (to eat, not drink) then I'll be printing off membership forms, dragging tables down out of the loft and emptying the car ready to go to the Motorcycle Convention tomorrow at Alford. If you're on Facebook you can expect a few piccies to be posted, but if you're on the blog only, it might take me a day or two to get some pics on here for you.

Hope y'all have a good weekend.