Why is it, you're wide awake before the alarm goes off, and as soon as it starts trilling away, you switch it off, and almost immediately, sleep prevails? Strange. Anyway, the weekend starts here at Cubbie Towers and I'm off to the Race Retro show at Stoneleigh with a couple of Grampian Classic club members. Will tell all upon my return. Meanwhile, your weekend plans are....?

PS anyone else going? Who am I likely to bump into?
Posted by Gorgeous Biker Chick at 08:02 1 comment:

Thank goooooodnesssss. It's the weekend, and I'm not working and the only place I have to go is to nip in to the local town. What are your weekend plans?
Posted by Gorgeous Biker Chick at 09:27 5 comments:

Hey guys and girls, got this email through from the Morgans Yearbook people... 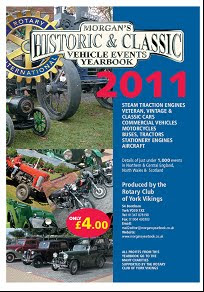 The 2011 yearbook is 80 pages and contains details on over 980 events including over 160 in Scotland and for those who wish to venture over the border another 130 in the counties of Cumbria, Northumberland & Durham plus another 690 events down to central England making it the most comprehensive ‘almanac' available for the area it covers.

The yearbook is produced by the Rotary Club of York Vikings to assist organisers of events north of a line from Aberystwyth to the Wash and up to the Shetland Islands that involve Steam Traction Engines, Veteran, Vintage & Classic Cars, Commercial vehicles, Motor Cycles, Tractors, Buses, Stationary Engines & Aircraft to publicise their events FREE OF CHARGE.

This helps thousands of enthusiasts, who purchase the yearbook, over 6800 copies in 2010, know about them.

The combination of these two things, plus financial support from advertisers, allows the proceeds of the yearbook...
over £118000 in the last seven years
...to be donated to national & international charities supported by the Rotary Club of York Vikings.

PLEASE HELP US SPREAD THE WORD AMONGST YOUR CONTACTS. We have to rely on the word of mouth as advertising in such a wide geographical area would be impossible.

THE 2011 YEARBOOK CAN BE ORDERED ON http://www.morgansyearbook.co.uk/

· or £ 3.00 per copy if 15 or more copies are ordered at the same time for delivery to one address

Thank you in anticipation of your support in ‘spreading the word’ from the Members of the Rotary Club of York Vikings and all the charities we support.

I made an executive decision yesterday. Seeing as I didn't get home from work until gone 11pm the night before, I decided that Wednesday would be a day of rest. Well, comparatively. So after doing all the animal related jobs, collating and transferring my figures to my boss, moving some timber to a better place of storage and having lunch at 2.30pm, the rest of the day was my own. Out to the shed. Off with Cubbie's brake shoes, at last - they need re-lining so I'm told, and then on to the little job of removing Terry's timing pinion. Cub forum member Scott was good enough to send me a couple of suitable pullers along with the oversize piston I bought from him, and with the right tool the job was simple. Screw the puller into the pinion, wind the inner bolt in and, with a little twist to disengage it from the distributor gear, pull the timing coggy thingy off. 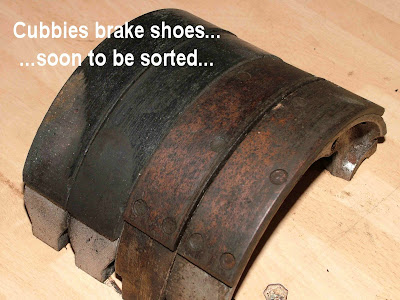 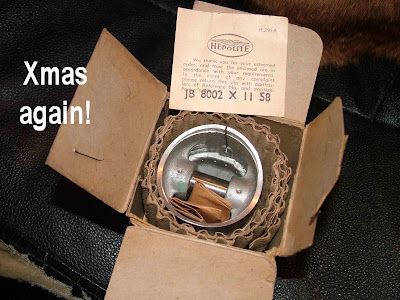 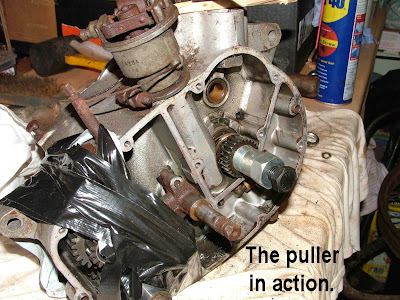 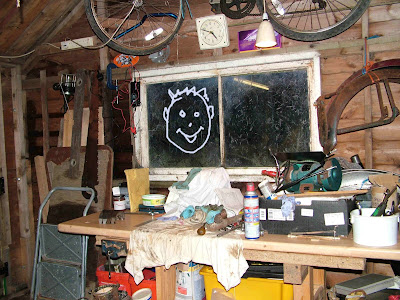 With that out of the way, the whole big end assembly was easily pulled out. The book states to clean it with a petrol / paraffin mix but as I didn't have any paraffin, I cleaned out an old oil container and used that as a basin, before swishing some petrol over it. Other than a few little bits of rust and stuff, it all seems ok. Dosed it up with a liberal amount of nice clean fresh oil and wrapped the big end do-dah up in a clean plakky bag and put it on the shelf for safe keeping. After that I used a rag soaked in petrol to scrub away at the old gasket goo on the edge of the case. Ok, I might have used a penknife too, but I was very careful. 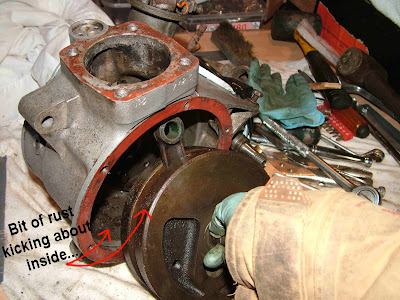 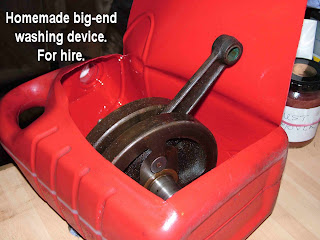 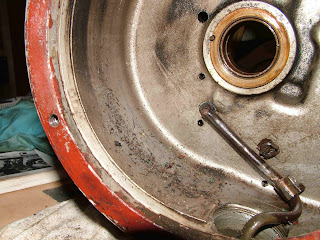 The oil return pipe seems to have snapped the small clip that holds it in place, and tell me something, why does the pipe have a split pin through the end of it? To regulate the amount of oil, maybe? What should the next job? I intended to leave the gearbox alone as to my novice eye it all looks ok in there, although that seal at the back might need to be replaced. What about the left main bearing that isn't a bearing, it's a bush, should I replace that as a matter of course? The colouring looks a bit 'odd', kind of worn in patches. Is it easy to get it out? Actually, how does one remove said bush?

UPDATE - just checked the bush again, one of the edges is chipped and broken so I guess it's gotta be tackled.
Posted by Gorgeous Biker Chick at 14:44 14 comments:

No, not shed building, much as I need another few sheds. No, this time I've been website building. My skills aren't up to much on a professional level but using the templates supplied I can knock a decent site or three into existence, well, I think they look decent, what do you think?
New site for information on rare breeds and keeping them in Scotland - www.rarebreedsscotland.co.uk

And finally, if you want to order your free range and naturally reared lamb and mutton, have a look here - www.lambandmutton.co.uk
Posted by Gorgeous Biker Chick at 13:07 14 comments: