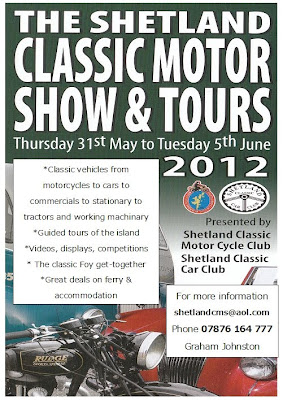 Time to book the ferry and find somewhere to camp....see you there?
Posted by Gorgeous Biker Chick at 12:28 5 comments:

I forgot to mention that the track we were on is modelled on the Silverstone track, hence the title of the video, GBC's Silverstone Debut. Sit back, belt up (trust me, you DO need to wear your seatbelt for this), and enjoy.

Watch it on Ewe Toob by clicking on this link...
http://www.youtube.com/watch?v=DZbe7IFEiS8&feature=youtu.be

Or click on the play arrow in the middle of this windowy thing, followed by the little box in the bottom right corner to open up the full screen home cinema...

I haven't got any 2 wheel machines to get my fix on at the moment, so a 4 wheel fix it had to be. And where better than a 1km long beatifully surfaced kart track????? Well, it would have been a beautiful surface had it not been quite so greasy on some parts, and covered in mud where everyone in the previous session had been off-roading and returning to the track with their wheels dragging sploggits of mud with them. There were 16 of us in total, mostly members of the Grumpy Club (aka the Grampian Classic MCC) with a few friends and family thrown in for good measure, and we all met up at our local Aberdeenshire track, just after 1pm this sunny Sunday afternoon. There was a bit of a bite to the gentle breeze but apart from that, it was a perfect day for being out and about. After topping up on the carbs and calories in the cafe, we all trooped up to the kart track and kitted up in the disposable overalls handed out by the chaps in charge. We were given a short safety briefing and instructions in how to operate the karts (right pedal for 'go' and left pedal for 'stop') before being split into groups of 4. 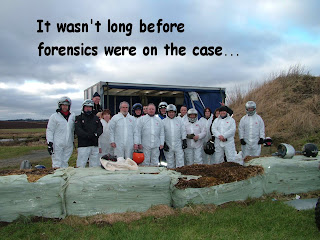 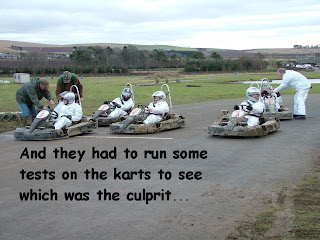 The first group out included two brave ladies who had never been karting, but boldly they climbed into the low slung single plastic seat (not the same seat, they had one each, not in the same kart, they had one of those each too, sorry, its late and I might not be at my optimum mental state for writing this!) and waited for the starter to start their karts. 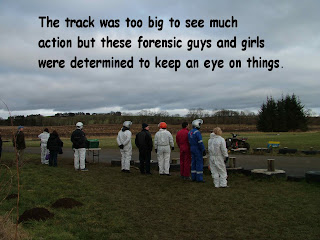 The two guys in the group were more confident and as Lorna and Val took things nice and steady, the chaps were catching them up all the time. Luckily it wasn't head to head racing, but each kart was sent off at intervals of a few seconds. The next heat was an all male affair, and you could sense the testosterone kicking in as the macho chaps all floored it and flew round the track. 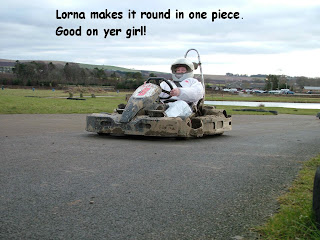 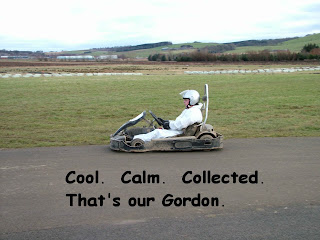 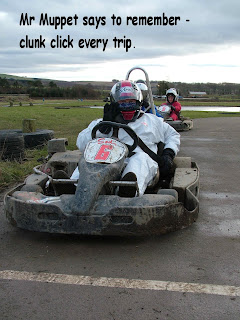 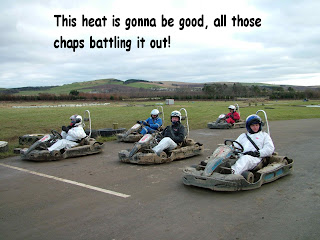 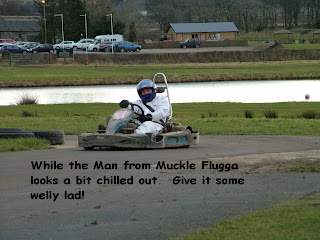 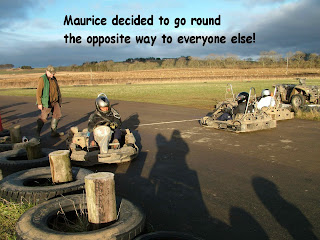 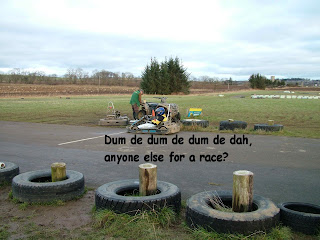 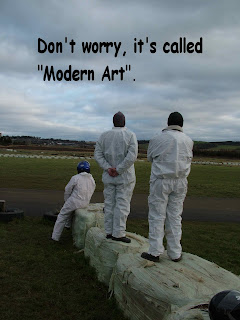 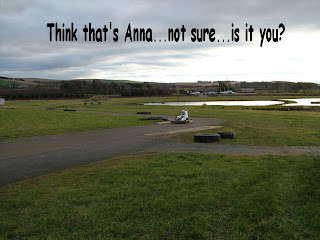 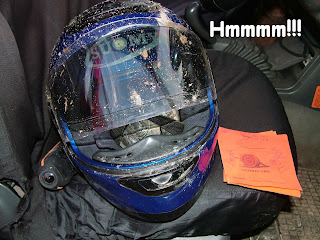 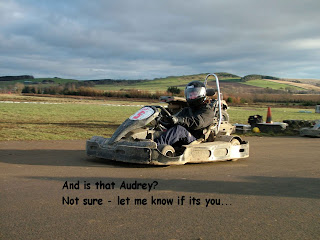 Hey Scottish Cubbers - give me a shout if you'd like to take your CUB or TERRIER to the new Scottish bike show at Lanark in May - cos it's just been confirmed that the SCOTTISH CUB FEST has been given a HUGE 12m by 2m stand!!!

Am I the odd one out? Cos I actually quite like riding a bike on a motorway - not Cubbie, but Skorpy handles the bigger roads quite well. Anway, this post is nothing to do with bikes, but it is to do with travel. So here we go......set off from Cubbie Towers late last Thursday, ended up staying near Cumbernauld, which is a good 4hours and then set off again on Friday at silly-o'clock in order to make to the VMCC Committee meeting at 2pm in Burton upon Trent. It would have been far more convenient to have just jumped on a plane, but guess what, there don't seem to be any flights from Aberdeen to East Midlands that get there in time for the meeting, and the only flight home I could find was from Birmingham at 7am on Saturday, meaning I'd have to be there for 6am, meaning I'd have to leave Burton at 5am, meaning I'd have to be up at even sillier-o'clock! 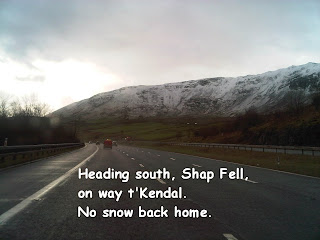 So, with the meeting done and dusted, my co-driver and I set off once more into the blue yonder, this time to Taunton, some 3hrs away. Well we didn't do too badly, even though there were roadworks everywhere, and we got to the Travelodge at 10.30pm. The next morning, Saturday I suppose that was, we were away by just after 8am for the co-driver to go and see a man about a trailer, a tipping trailer, an Ifor Williams tipping trailer. We took a little detour through some nice villages, went past the Worlds End and finally got to the village where the trailer man lives. Rang him up, found out we'd then have to sit and wait about 20mins for him to get ready, before following him to his yard where he keeps the trailer. Not having met the guy, or knowing exactly what vehicle he was driving, we were passed by a small transit van, which, for some reason, we decided to follow. Another few miles of narrow, twisty Somerset lanes and we were beginning to wonder if we were following the right person, but eventually, he pulled up at a timber yard, opened the shed and there was the trailer. Inspection done, deal done, co-driver handed over the readies (a wad of very green and very crisp £50 notes was received with a little caution by the seller, who didn't seem to have seen Scottish fifties before!) and then we were on the road again. 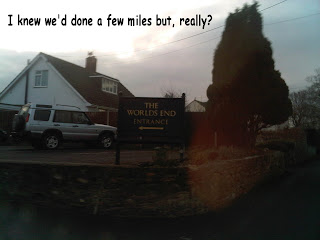 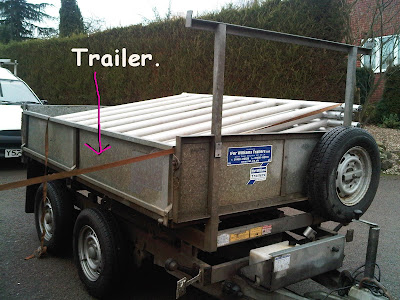 Essex was the next stop, only 225miles east, via the M4. We got there about 3.30pm if I recall, viewed, inspected and road tested a Vauxhall Frontera to add to the flock at Cubbie Towers (our current one is a bit poorly). There were a few things about it that the seller had forgotten to mention in the advert, and as I pointed them out to him, I could see he wasn't used to being told about cars by a woman! Still, a deal was struck involving some top quality tarpaulines that we just happened to have with us, and some more of those lovely Scottish fifties were handed over - much to even greater consternation, and we were on our way again. It's not far to Derbyshire from Essex, only 193 miles. Yawn. We had planned to be there in time for tea to treat our hosts to a meal but alas, it was gone 10.30pm by the time we got in, so it was a stop at the chippie for us which we rather naughtily took back to the house and ate in front of our hosts! Sorry, hosts. 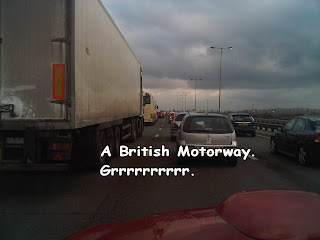 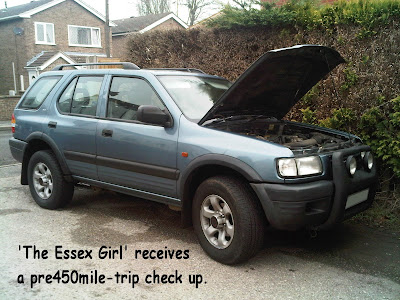 No rest for the wicked, up at 7am on Sunday and off to collect the co-driver's tower scaffolding from a friend of a relative, who had been storing it (or maybe borrowing it) for a while. Arrived at 8am, the guy wasn't up. Rang, knocked on door, still no answer. Told by said relative that the friend probably wouldn't be up til closer to 10am! Grrrrrrrrrr was all I could think! So we went away and got a bacon roll, killed a bit of time and returned bang on 10am, and finally, the guy answered the door (wearing not very much and looking a bit surprised) and unlocked the garage. With the scaffolding loaded, and several hours behind schedule, we returned to the hosts and gave my new Fronty the once over. Checked the fluids, air in all the tyres, put the spare on as one of the fronts was a little on the bald side and we were off on another 10+hr journey north to Cubbie Towers. The new truck performed faultlessly on the run home, although I'd be happier if the steering column didn't move mid-corner.

So, that was some 1500miles in total, 450 in the new truck, goodness knows what all that motorway service station food will have done to us, and those pick 'n' mix sweeties at Glasgow were, to be honest, disgusting! I managed to eat a few tho... 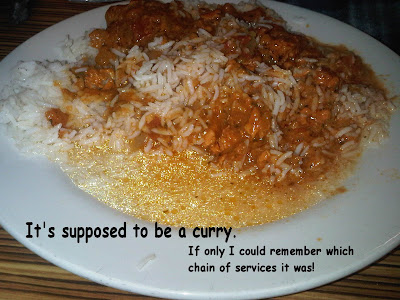 Old Bloke on a Bike.

Did you see the little snippet in Old Bike Mart about that guy who is riding his bike from Nepal to Belgium? He's not on a plastic rocket or a fancy tourer, no, he's riding a 1910 FN. A bike that is one hundred and two years old. Say that again, out loud and you'll see how scary it sounds!

Anyway, have a read of his blog www.oldblokeonabike.com
Posted by Gorgeous Biker Chick at 22:23 3 comments: