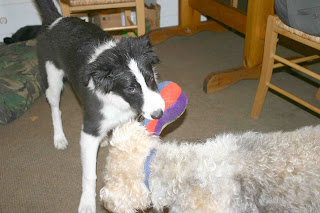 My knees are sore, but it isn't what you're thinking! We've got an incontinent old Fox Terrier and a nearly toilet trained collie pup, and between them they've kinda ruined the kitchen carpet. The good folk on Aberdeenbikers came up with some second hand stuff and I've spent most of the day crawling around on my hands and knees fitting it. Not a bad job though if I may say so. I was hoping to have finished fitting the primary chain on the Cub but such is life, maybe I'll get that done tomorrow.

Santa arrived yesterday with a couple of early pressies for GBC, namely a nice little engine for my 250 MZ and that all important sidecar chassis. So now I've got all I need to build the Gromit Machine. Or should I call it the Stig? (The chair was found in a skip so if the name fits...). Let's see if I can set up a poll on here and you can vote on your fav name.

On the subject of MZs, I had to nip down to Perth yesterday to test a BSA Shooting Star for the mag, so decided to give the Skorp a run out. I'd forgotten how much I love to ride it. The chap who owns the BSA rode it for a while and commented on how light it is - one of the reasons why it's such a great bike for me, 'cos I'm only likkle. The trouble is, having a Royal Enfield 500cc Bullet with electric start on loan for the summer means my poor old MZ gets left in the shed sometimes, which, admittedly, is better than leaving it out in the rain, which is where it has spent most of the summer due to the Cub moving from the house to the 8 x 6 shed. I need more sheds. But I feel they'd end up growing bikes in them.
Posted by Gorgeous Biker Chick at 23:31 2 comments:

A bitta this, a bitta that. 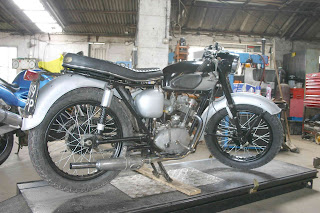 Well it's official, my 1962 cub passed the MoT recently and the proof is in Classic Bike Guide August issue. It still needed a new primary chain, rocker feed pipe and as I later discovered after my first ride out on it, a new battery and / or rectifier. There is also the small matter of a high pitched squealing noise from the speedo. First things first, I can't fix that problem until the charging issue is fixed (the battery only holds enough charge for one start at a time) so I decided to order the chain, rectifier and feed pipe and get them fitted. Easy jobs to anyone with a decent garage space and a few spanners. I've got as far as fitting the chain but needed to source a new Woodruff key for the rotor, which luckily my local garage had in stock (just hope it fits). Trouble is, I haven't had time to finish the job, and if I'm not careful, I'll forgot how to put the thing back together. I had a look at fitting the rectifier and couldn't work out which of the unmarked terminals connected to which wire. So it's all going to plan.

The 250 MZ sidecar project is taking shape now though, with the chair, frame and fittings all being sourced (from each corner of the UK) and with a bit of luck the engine for the bike will arrive very soon - Santa's visiting early in case he gets snowed out.

Latest news on the 650 potential project is that I'm going to view one in August. And that's all I'm saying on that one!

Thanks for reading.
Posted by Gorgeous Biker Chick at 23:04 3 comments: 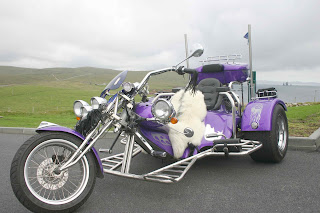 So there I was, planning my trip to the Shetland Isles for my ‘day job’, and I suddenly thought of trying to organise some bike tests, or at the very least meet up with some of the chaps I met at their classic show last year. A quick email to my contact up there led to a reply from Geordie who is some sort of head honcho in the classic club. A few mails later and hey presto, there was a list of people to contact once on the island. Irritatingly, the best of the weather most days was when I was working, so only one of the tests happened in full – thick fog and torrential rain stopped play on the rest of them. However, I did get to meet Colin and Carol from the Cruiser club, and they organised a ride out on the Sunday – I was lucky enough to be allowed to ride pillion on the Purple People Eater – aka Colin’s new trike, while Carol rode her Harley Sportster (the Yellow Peril). The route was beautiful; we headed north west to Eshaness, site of the most westerly lighthouse on the mainland (I think but don't quote me on that), and a nice little café. The weather had closed in by the time we got there so the view wasn’t up to much but check out the trike!
It sounds like a cliche to say the people were incredibly friendly and helpful, but it's true. Geordie, Tom and Robbie gave up a Sunday morning to let me test their Ariels, while Joe spent a good few hours letting me look around his collection of old bikes, as did the Johnson family, and the Leasks too let me have a peek in the garage. I was invited to tea a few times, and one of the highlights of the trip has to be being granted an Overseas membership of the Shetland Island Cruiser club! I'm now a SICO - see their site here www.shetlandislandscruisers.com.
Tom is the guy who runs the ferry to the small isle of Mousa and he let me hitch a ride there and back. The crossing is only about 10 minutes and the view looking back to Sandwick House is pretty impressive. I'm having trouble putting pictures on here, but I'll post one of that soon.
Posted by Gorgeous Biker Chick at 22:25 No comments:

Howdy howdy people, welcome to the first Blog from Gorgeous Biker Chick of Classic Bike Guide fame. While I live and work with old motorcycles, it is my belief that there is plenty of room for such modern creations as the the internet. In fact, without it, I probably would not have been able to complete my first restoration project, a 1962 Triumph Tiger Cub, but that's another story. Email, web forums and instant messenger are all great ways of keeping in touch but now I've been cajoled into trying a Blog. Hope you enjoy keeping up with me, and any comments and feedback will be much appreciated.
Posted by Gorgeous Biker Chick at 20:01 3 comments: