On a natural high, baby! 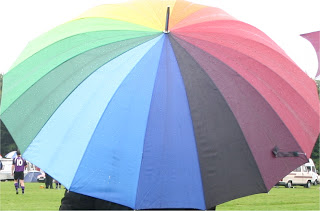 Captain Bill and I set off to the National Assembly of Vintage Motorcycles at Blairgowrie with the Cub in my van and his Connaught on the trailer. It was quite nice to have company (not to mention a supplier of chocolate) for the 3 hour trip. Normally I'd ride down on the MZ with all my camping gear on the back, but the Cub being a somewhat smaller capacity, I thought it best to take the easy option for once. We arrived with plenty of time to spare, even though I was an hour late picking Bill up, and there were some yummy stovies on offer at the pavillion. The banter was good, the UFOs were out in force and a good night was had by all. The rain set in on Saturday morning and stayed for most of the day, on and off, but that couldn't spoil my fun. With Short Stan running a book on the chances of me and Cubby completing the course, I was ever so slightly nervous. Adding to the nerves was the fact that I had no one to follow this time so had to navigate all by my little self. Obviously I can't divulge the results but I can say I'M ON A NATURAL HIGH, and I only took two wrong turns. Captain Bill filled his swag bag at the evening award ceremony and again, a fine night of banter - and counter banter was enjoyed by everyone. I hope to organise a regularity run like this for our North East Section one day. Don't hold your breath though 'cos it probably won't be until about 2010.

Puppy is coming along very well, although he's not really a puppy now, at 6 doggy monthshe he must be a teenager by now. He seems to have eaten all his chews and the only toy left is the squeaky one. That's fine, but not when I'm trying to make phone calls! His obedience training is progressing nicely, and he's nearly mastered the Sit and Stay while I throw said Squeaky for him. He still thinks it funny to sit on Uncle Barney's head though, which doesn't help the poor old chap, whose head is permenantly to one side.

Must start making a list of things to take to the Manx....and look up campsites....and dry the tent out after the deluge last weekend....and get the tyres fitted on the MZ....and....and....oh yeah, go to work. Humbug.

Posted by Gorgeous Biker Chick at 14:01 No comments: 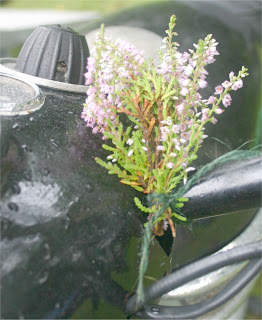 Just a quick report from the S&T at Crieff. Can't say too much because a full report should be in Classic Bike Guide in the near future, but thought you might like to know the Cub maintains it's 100% record. Each time I've been out on it, it's broken down. Minor details so far, and all to be expected after simply bolting the engine back together after a 30 year lay up. Some of these problems however, have been owner induced, but you'll have to check the mag for all the gory details. Thank the God of Classic Motorcycling for gracing us with so many helpful, friendly British bike enthusiasts.
For anyone not in the know, the S&T is an event where you nominate a speed and route length from the choices given by the organisers, and I think you're supposed to aim to maintain that average speed all the way around, arriving at checkpoints at the right times. I struggle to read the 'maps' they dish out let along make it on time, so I just had a good time chugging along in the pouring rain. I've acquired some of the stuff I need to fix Cubbie up for next weekend, so I'm in with a fighting chance.
****
The 650 project by the way, is a no no. Not enough bits there.
****
Collins dictionary definition of 'gorgeous' - splendid, showy, dazzling, extremely pleasing.
Posted by Gorgeous Biker Chick at 15:17 No comments:

More o' this, more o' that and not enough fuel. 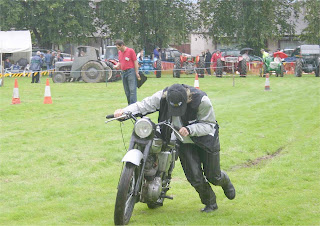 Got quite a lot of news this time. I finally managed to make time to finish the primary chain fitting. I had to attack the new Woodruff key I'd acquired with the grinder though as it was way too big. I started off with a file, then a hacksaw but neither made a mark, so after some advice from Diggy in NZ, I fired up the grinder, and I'm really quite proud of the job I did. Then all I had to do was cure the leaking petrol tap in time for the Oldmeldrum show (yesterday). I had a new circlip for it but that didn't help. I've lost count of the number of times I had to drain the and fill the tank, fit and remove the tap. I tried the tap from my Bulto, which did fit but leaked even more! (It didn't leak on the Bulto). I found an old push / pull device in the box of Cub spares, cleaned it all up, fitted it, put petrol in the tank, only to find that it was gushing out of the tap before I'd even turned it on. It took about 3 hours of this before I finally beat the old one into submission. It only dribbles a little bit now.

All that remained was to fit the new solid state rectifier, which should have been a simple case of removing the wires from the old one, and hooking them up to the new one. Wrong. With only a + mark to guide me, I didn't have a clue where to attach the other three wires. My electrical advisor, Fido, came up with a diagram showing which terminal was which and after that it was easy peasy. And guess what? The Cub still started. But this was Sunday morning by now, and although it started it just would not run. So, out with the old petrol which must have got contaminated and in with fresh which I'd drained from the Royal Enfield and my MZ.

That was enough to get me to the show, but during the games, Cubby spluttered to a halt. Oops. Luckily I'd taken the can with mower petrol in for emergencies (being Sunday the local garage was shut) and that was enough to get me home, well it would have done if we'd got that far without a breakdown. About 5 miles from home, and in the tipping rain, the clutch started slipping and then we ground to a halt, the clutch lever refusing to be moved. Luckily, good ol' Mum was to hand with the back up van and in the Cubby went. Investigations will take place soon - ie before the club run tomorrow evening.... At the latest, I need to fix it for next weekend, which is the S&T at Crieff, and the following one is the National at Blairgowrie. After that I'm off to the Manx GP - but that's not on the Cub. Can't wait!

I'm looking forward to tomorrow - it's viewing day. This is the 650 project I'm talking about. I'm trying not to get too excited, but having read a few write ups about the model in question it's hard not to. I'm still a little bit unsure if this is the right time to empty all my piggy banks, but I'm convincing myself it is an investment.

Robin of Wales and his clan popped in to say hello, they're camping a few miles away. Finn loves playing with the two younger kids, and they've been really good with him - a constant source of stick throwing! They joined us at the Oldmeldrum show and had a good time, although Robin refused to take a spin on the Cub in the games. I wonder how their tent stood up to the thunder storms and torrential rain last night.

Well, having just finished my write up about the Ariels I tested in Shetland I'd better start on the BSA Shooting Star report. Is there no rest? My boss of the day job has been on at me too for not reporting regularly enough. Think it's time for a doughnut. Over and out. Ps thanks for voting in the sidecar poll.
Posted by Gorgeous Biker Chick at 09:30 No comments: