I got home from work quite late on that Friday, having been to a meeting in Glasgow.  Mrs BC said there was a phone message for me.  I checked it and couldn't quite understand what Gordon May was saying - so I called him back and it all went from there......would I ride a brand new 500cc RE Continental GT on one of the Scottish legs somewhere on the route south from John O Groats?(**see footnote).  Well, shucks, let me think - yes, of course I would!  Then came the not so good bit, I had to get to Fort William for around midnight on Saturday, in order to ride a night time leg to Carlisle.  Not wishing to have to return to Fort Bill to collect a vehicle at the end of the ride, MFM gave me a lift across and we arrived by 23.00hrs with the aim of catching a couple of hours sleep in the car.  Well, he did, but I didn't.  Too excited.  Way tooooo excited, nervous, excited, nervous etc etc etc, not to mention too cold and cramped and uncomfortable scrunched up in the passenger seat.  At 01.00hrs we went to the BP garage to meet the Royal Enfield Team, where I was furnished, if that's the right word in this instance, with an RE leather jacket, gloves and helmet, which was jolly decent of them.  The other riders for this leg started to turn up, and we all waited for the crew from JOG to arrive.  It was cold for the time of year, middle of May, and rain wasn't far away. 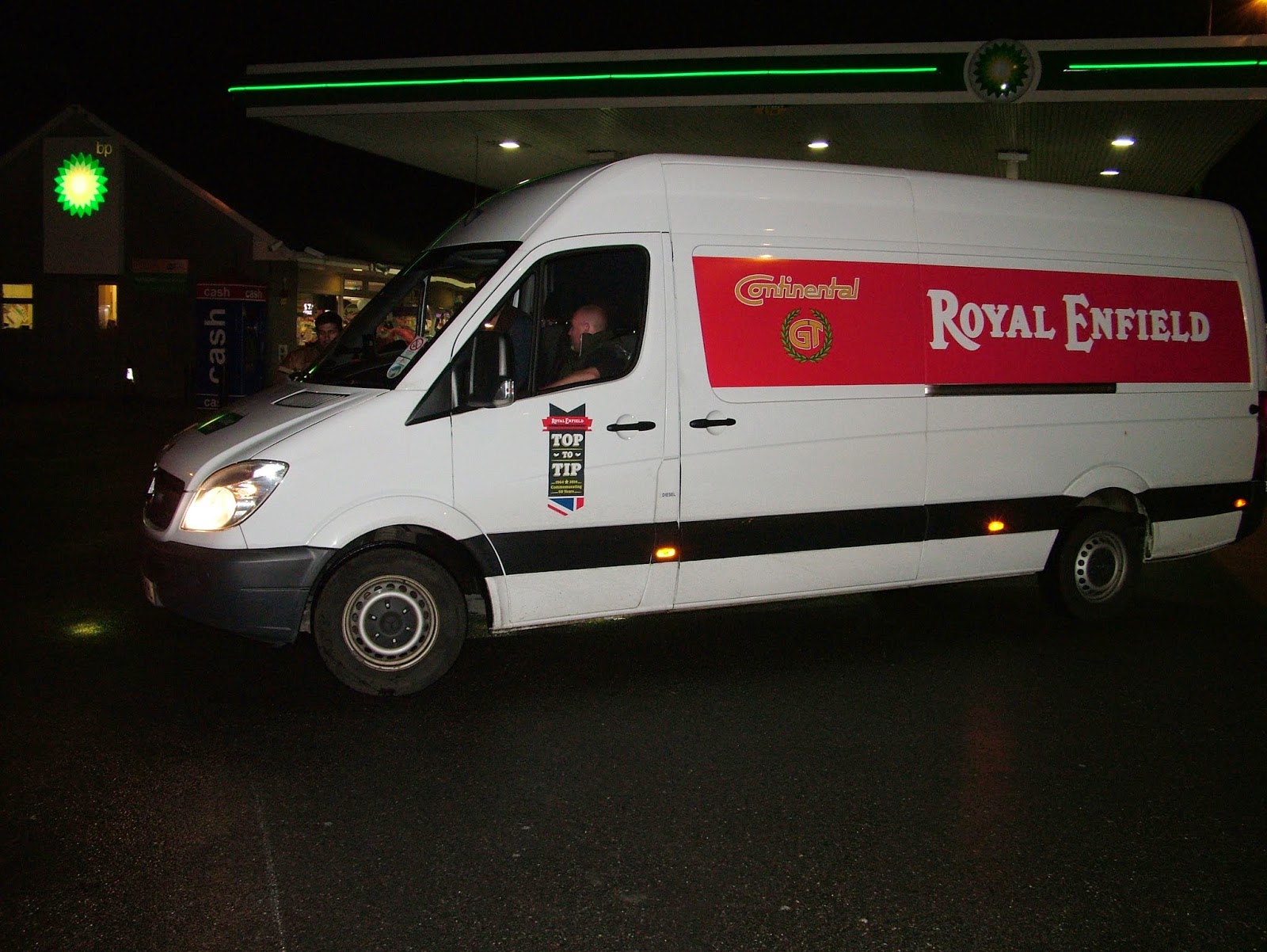 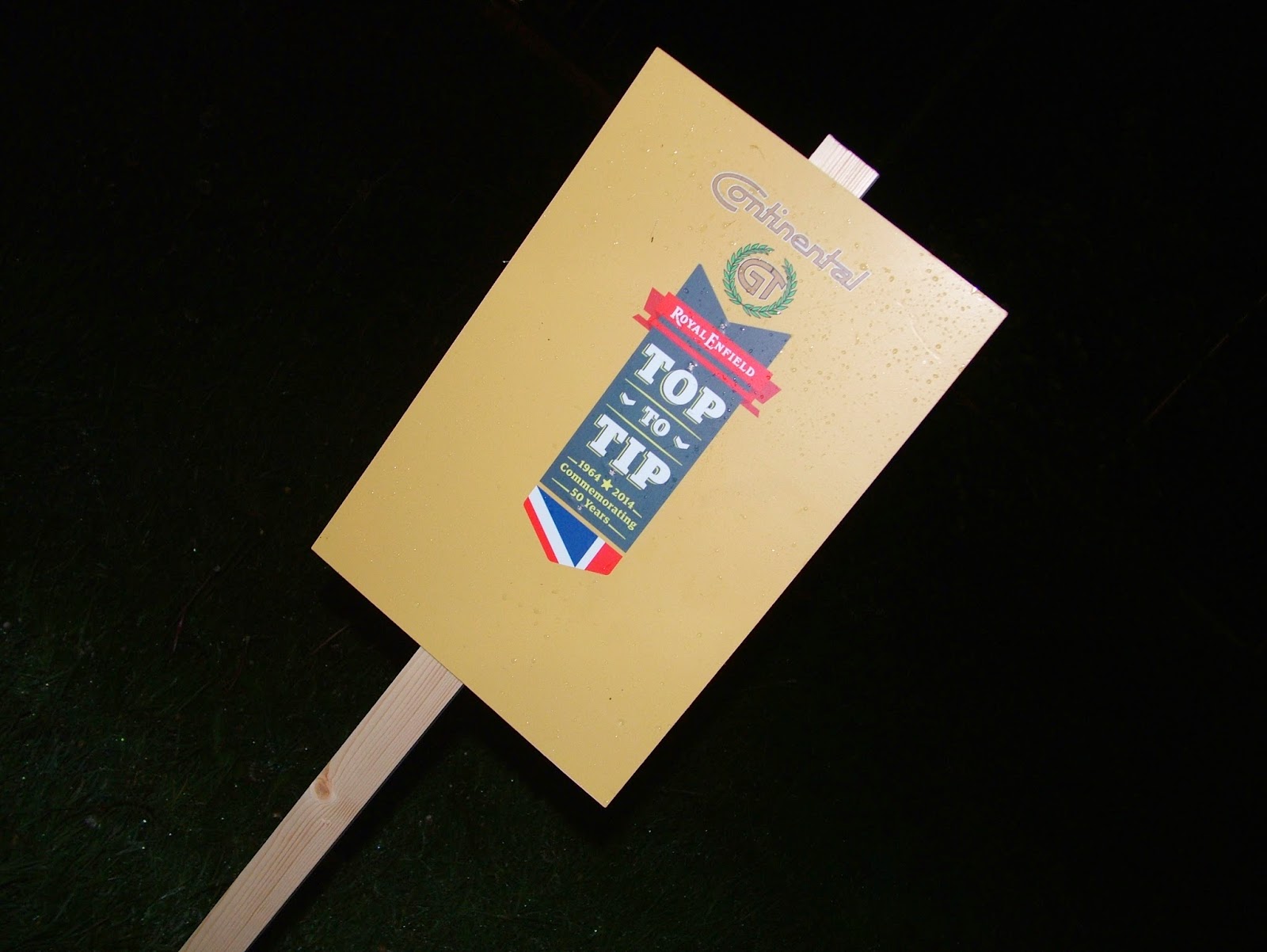 The first lot of riders started to arrive at about 02.00hrs, with RE's own rider, Sachin screeching into the forecourt first, followed a bit later by Dougie and the others.  By the time the bikes were re-fueled and we'd all signed various insurance forms and been given a 30 second lesson in using the pre-programmed sat nat, it was gone 02.30hrs.  Little ol' GBC was last away, closely following the rider in front who's name I'm ashamed to say I can't recall - I think it was Adam, and so I shall call him that for ease of writing.  The riders in front of him blatted away into the night, leaving us stuck behind a lonesome car as we meandered out of Fort William on the A82 to Onich, before turning inland to Glencoe.  What a feeling.  Riding a motorbike, in the dark, in the very, very early hours of the morning, alone.  Well, nearly alone.  If you don't count the guy ahead of me, and the photographers/film crew, private ambulance, back up van and couple of cars behind me. But still, it was a fabulous feeling.  The mountains either side, sternly and gloomily stretching up into nothing-ness.  The echo of the bike, changing with the throttle adjustment, blipping for down-shifts and being mindful of not thrashing it too much as apart from the couple of hundred miles from JOG to Fort Bill, these bikes were fresh out of the crate, yet to be run in.  Ever watchful for sheep or other nocturnal beasties we made steady progress - the sheep were slightly more predictable than the film crew, who would come flying by to get ahead and then slow down to quite a boring speed, enticing us to overtake only for it all to happen again.  Still, that's what it's like trying to get good footage.

It was now raining quite steadily.  The roads were a bit on the greasy side, it was pitch black, but it was fun.  Soon we were passing Loch Lomand but to be honest, it could have been anywhere on this earth, the night was so dark, and all I could see was the headlights in my mirrors and Adam's tail light up ahead.  On the outskirts of Glasgow, things went a little bit wrong.  Our sat navs were programmed to take us to a pre-determined fuel stop, but Adam missed the turning.  I followed him, thinking perhaps he had instructions that I wasn't aware of - after all, they'd told us not to split up.  We pulled into a layby to discuss what to do (having lost the trail of back up that was following us) and realised we couldn't turn and go back - we were on one of those urban dual carriageway contraptions with no U turns and central barriers - and so the only option was to carry on to wherever we saw another garage.  Well, we didn't!  We stopped a bit further along, with the backup now having caught up, and they told us to carry on to the next garage.  Adam and I then got split up at some roadworks, so I carried on following the sat nav.  Through the Clyde tunnel I led the ambulance and film crew, once, twice, no, thrice!  Well, why not! 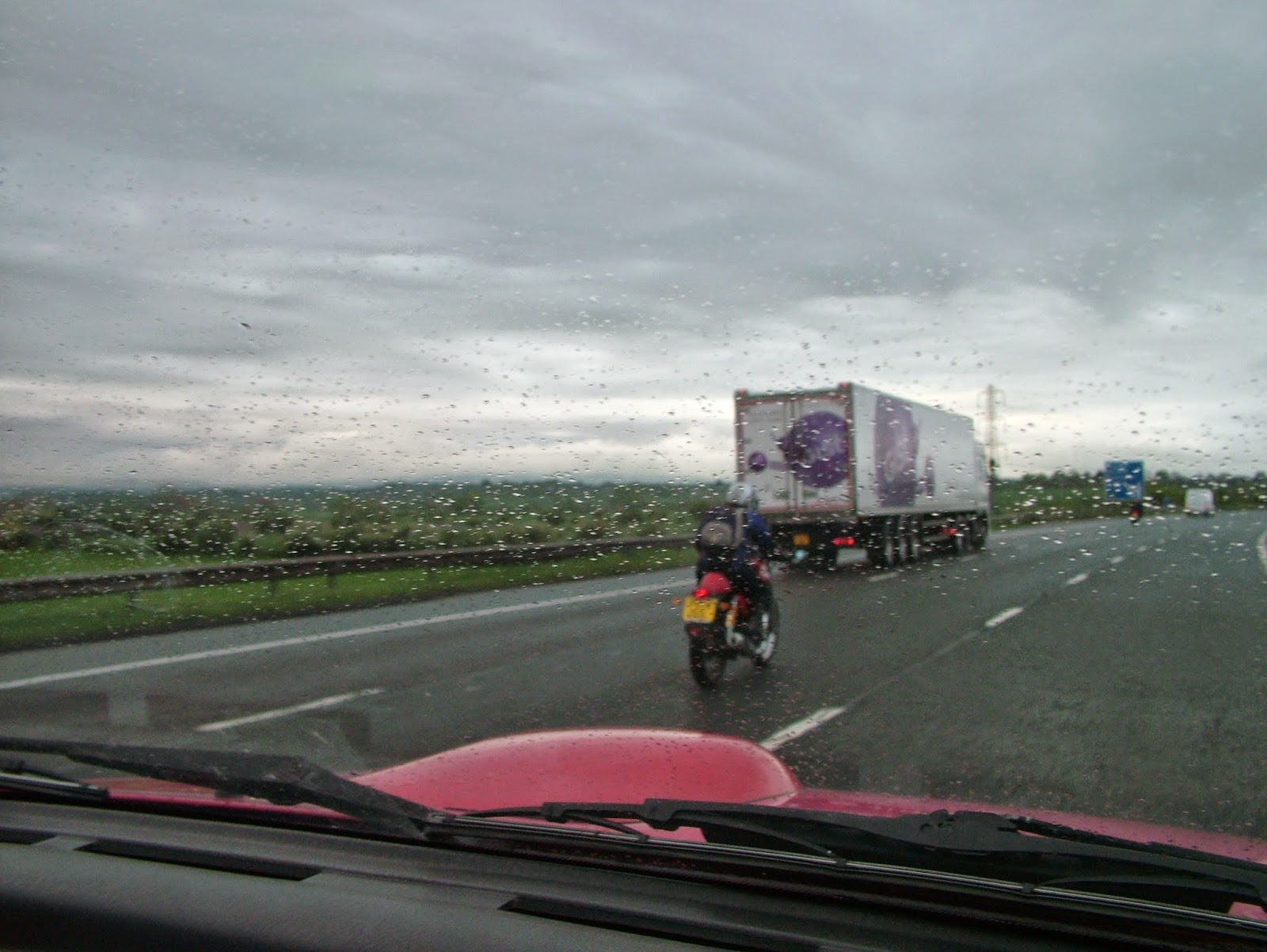 The rain was absolutely hammering down by now, and GBC was getting slightly tired, tetchy, cold and very wet - thank goodness for the heated grips.  There was no sign of Adam, so I stuck my head down and ploughed along the M74 to Bothwell services, where I was relieved to see the white back up van pulling in behind me, followed by Flugga Man who had some dry socks for me!  The RE guys filled my GT up from the van, and said the last they'd heard was that poor old Adam was heading north - each of the bikes was being tracked from HQ so there was no chance of getting too lost.  He soon appeared though, and a 10 min break from the rain was enjoyed by both of us before we wearily slung legs over saddles and set off.  The instruction was now to stick on the motorway and get to Carlisle ASAP as we were a little behind schedule.

We rolled up to the Golden Fleece services at Carlise at 07.23hrs.  My word, what a night!  What a ride!  What an experience and an adventure!  Adam and I happily handed over our bikes to the two waiting riders, I think Gordon May got my one, and they re-fueled and set off to try and make up the time.  We were then taxied to a nearby hotel where we were given Royal Enfield tee shirts, and then we slept and we slept and we slept.  Some time later, Flugga Man commenced the taxi service back to Cubbie Towers and I seem to think I probably slept a little more on the way north.


** this ride was to celebrate the 50th anniversary of the 250cc Continental GT which was ridden on a Top to Tip route in 1964, complete with a lap or two of Silverstone where John Cooper broke the lap record and established the GT as the fasted British 250.

Posted by Gorgeous Biker Chick at 19:05 No comments:

At one time, I'd never been to the great and glorious Stafford Motorcycle Show, and every time I tried to get there, something always went wrong.  Somehow I've now managed to attend twice a year with the Cub Mag in one form or another.  April 2014 was quite a trip, starting with having to stop off in Aberdeen at a parcel depot to collect the freshly printed Cub Mags - issue 9.  This was the first time I had outsourced printing and I might have left it a day or two too late to have them delivered to Cubbie Towers.  The parcel place was shrouded in thick fog and it took us a while to find it, but luckily Edward Turner Bear was on the case.  He sniffed them out. 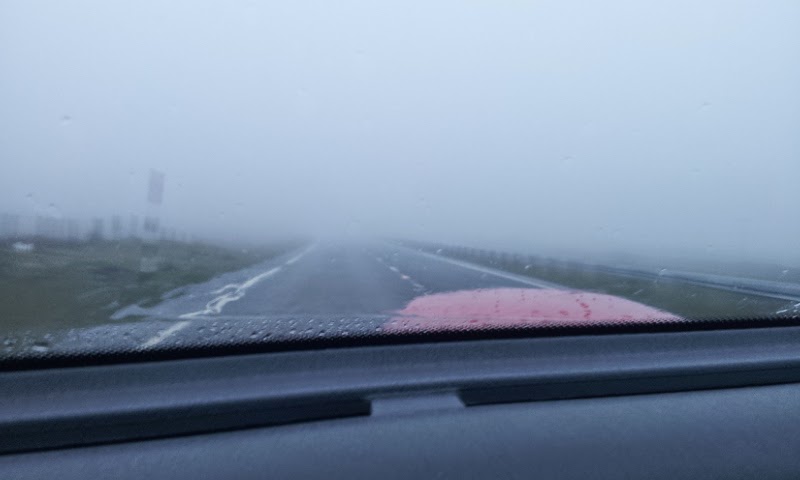 We set out our stall next to Greystones, with magazines, mugs and tee shirts on display, ready to meet and greet subscribers old and new. 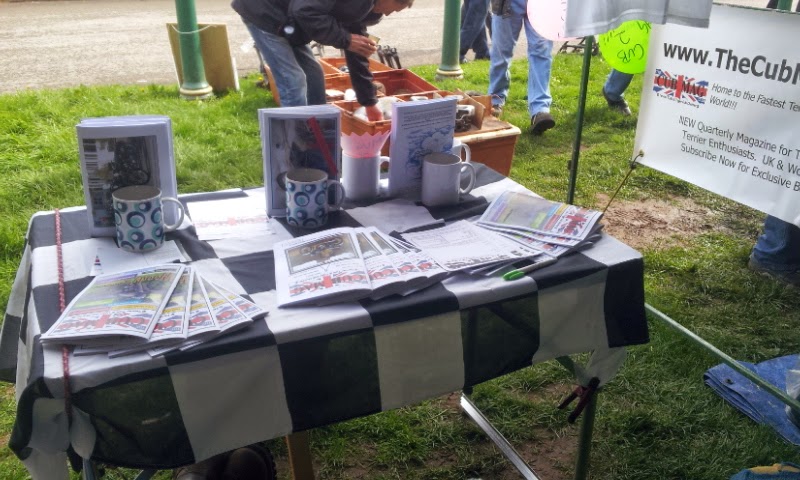 Posted by Gorgeous Biker Chick at 17:02 No comments:

The Large Lunch was the first bike event of 2014 for us.  It's an idea that came from the CBG Big Breakfast, and I thought we should have something similar up in NE Scotland.  So the Grampian Classic MCC has organised the Large Lunch for the last 5 or so years I think.  It used to be at the Sheiling Tor in Fyvie, but after they closed and sold up we had to think of something else, which isn't as easy as you think because of the nature of the Large Lunch - we don't know how many people need to be fed and we don't know how much space is needed for bike parking.  We settled on the Dean's of Huntly visitor centre, which has a nice restaurant and quite a good bit of parking.  This year Cubbie was my steed, with Muckle Flugga Man on the XJ650.  The weather was nippy but sunny, and there was a good turnout from the Grumpy Club members with a smattering of non-members turning up to say hello - for future reference, the LL is open to ALL bikes and bikers; we'd like to meet you.  Cubbie enjoyed the run over to Huntly, only 40 mins or, but it was good to be back in the saddle, and the only annoying bit on the way there was a car that went frustratingly slowly in the bendy bits and a smidge too fast for Cubbie on the straights, grrrr! 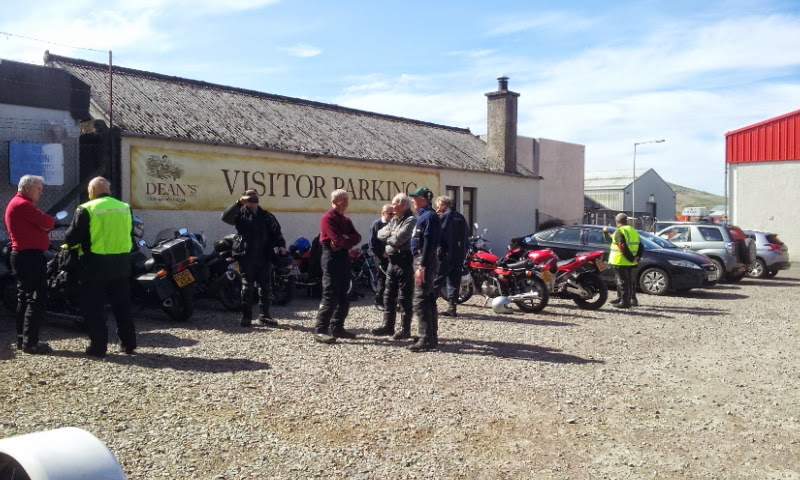 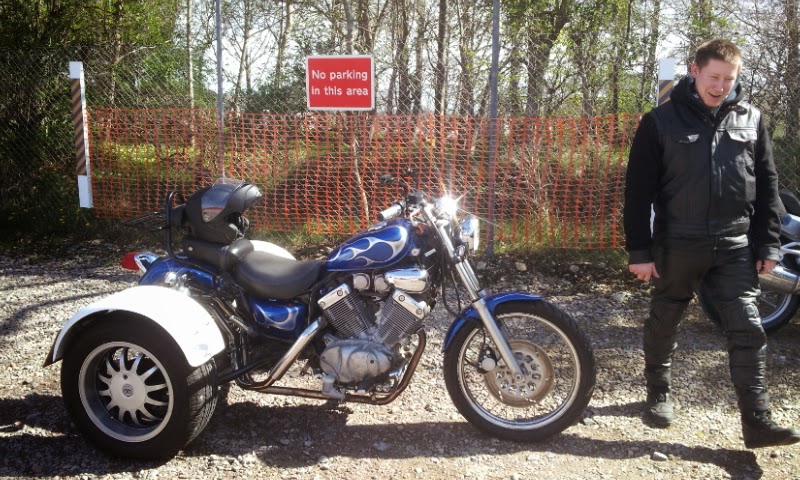 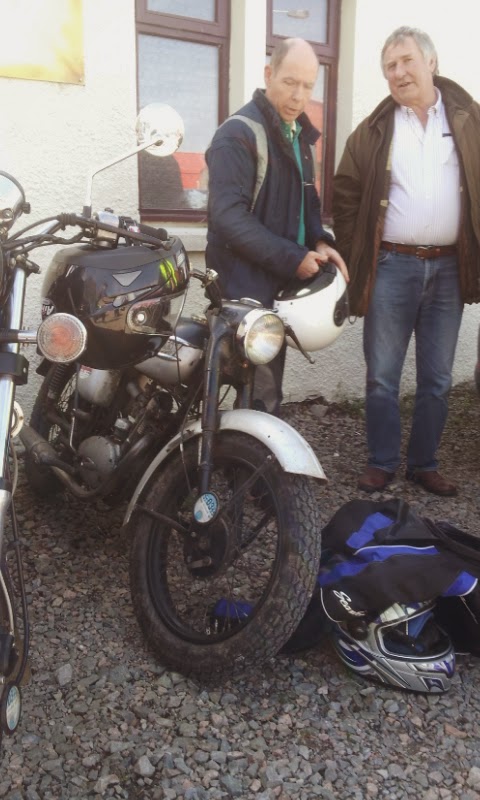 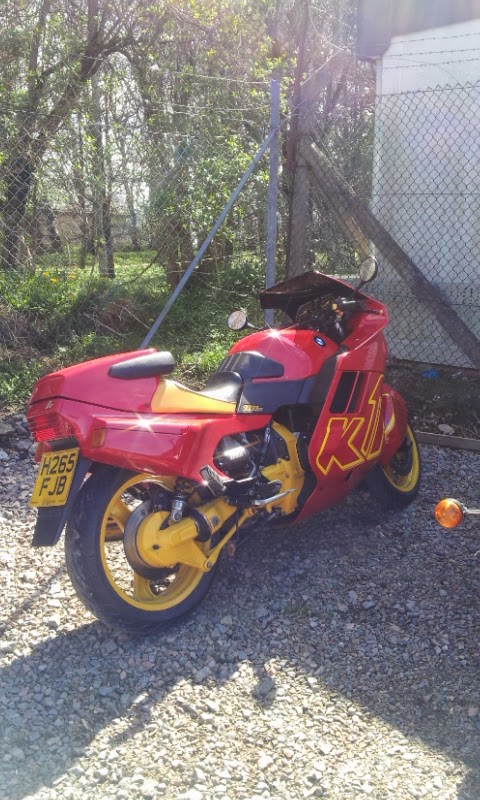 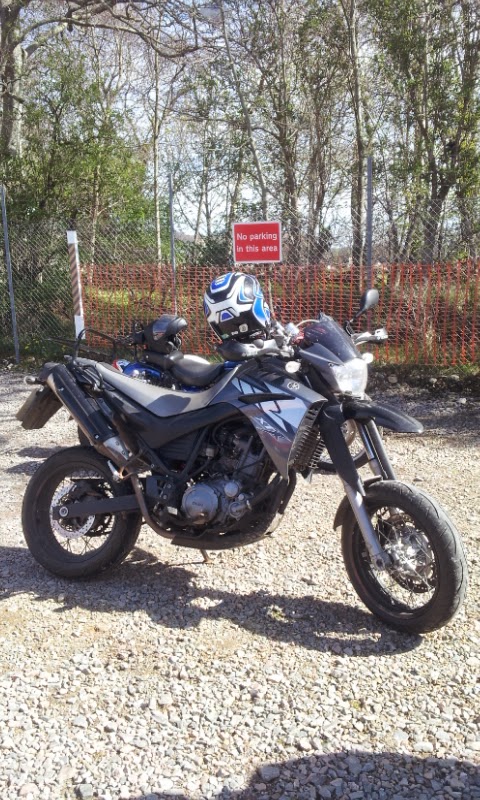 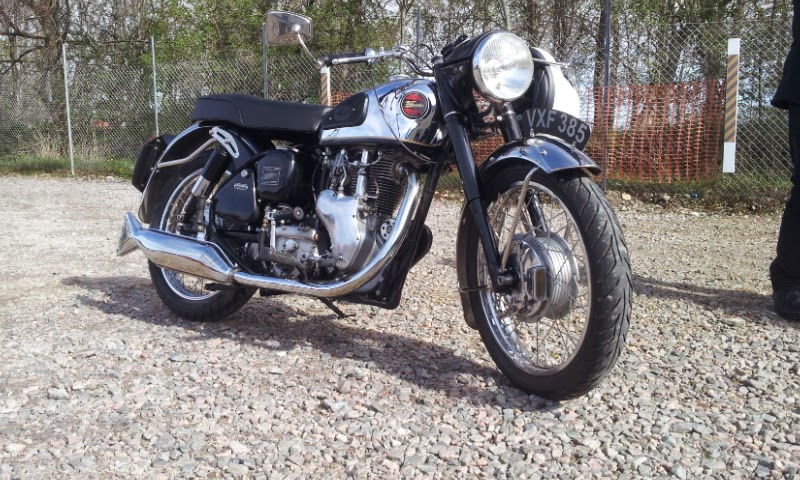 There were some weird and wonderful bikes present, some of which we've not seen on Club runs before.  After the customary tyre kicking and chit chat in the car park (with some people expressing surprise that Cubbie was there, for real, and was running purrrrfectly!) we all managed to get seated inside for a bite to eat.  Then Slick had the great idea of a wee run to the coast for ice cream, and so half a dozen of us set off to Portsoy where we just got served in the ice cream shop before they closed. 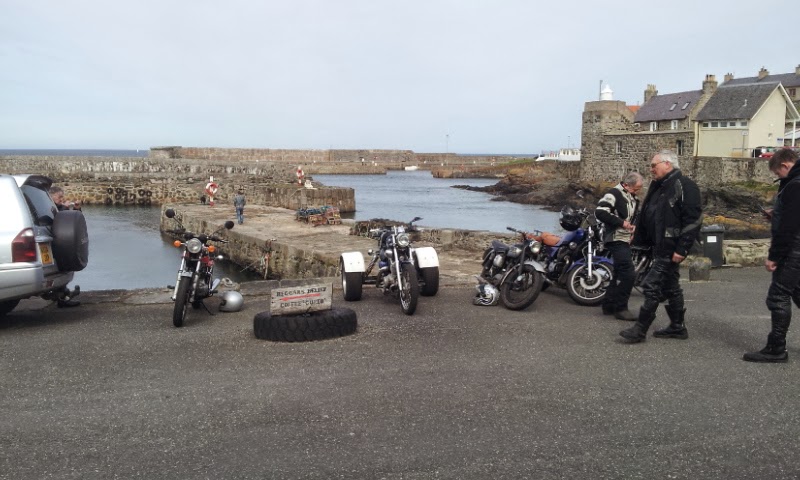 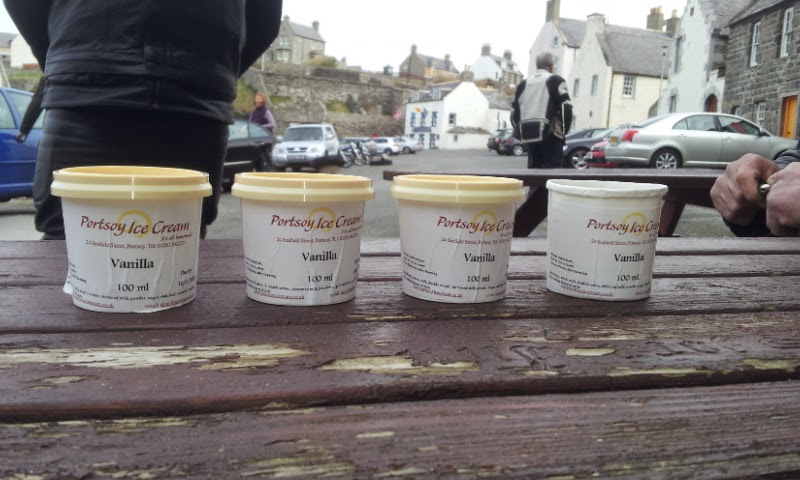 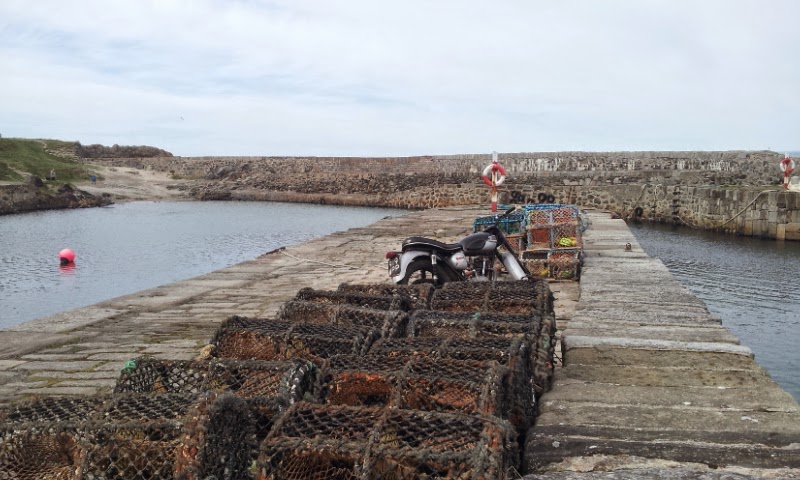 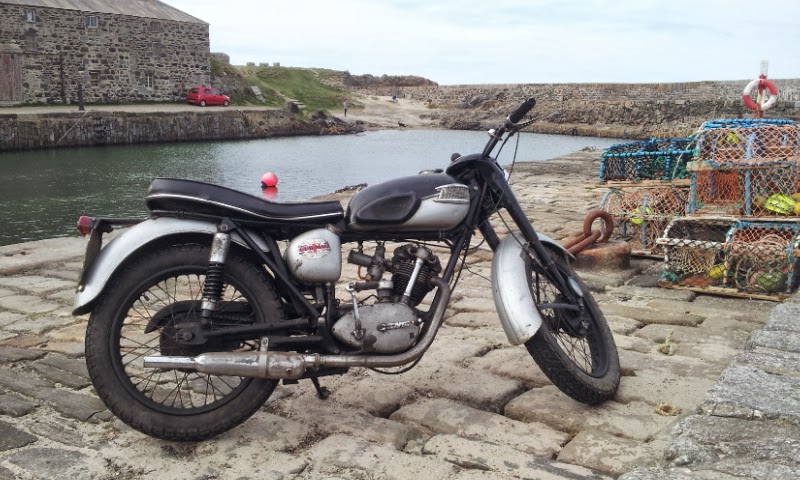 A short run back to Cubbie Towers, and all in all, a good day out.


Posted by Gorgeous Biker Chick at 16:11 No comments: