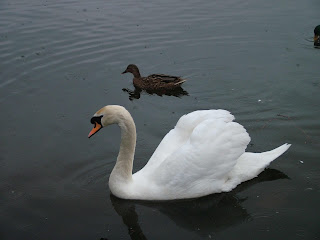 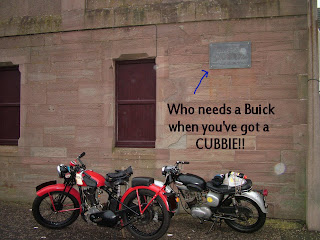 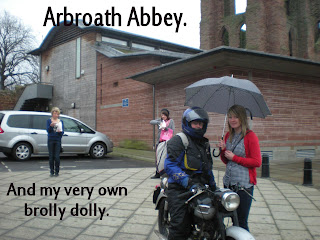 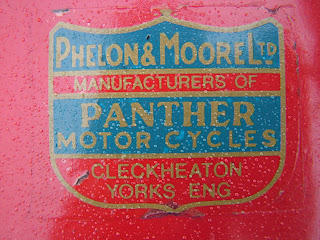 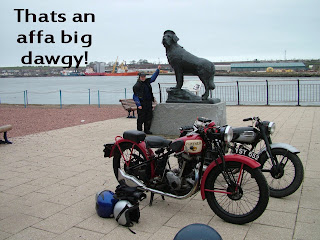 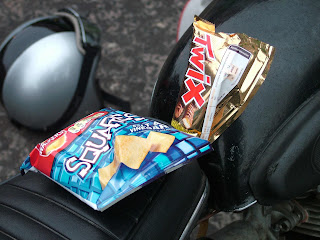 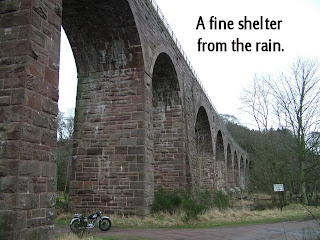 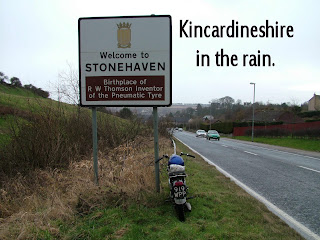 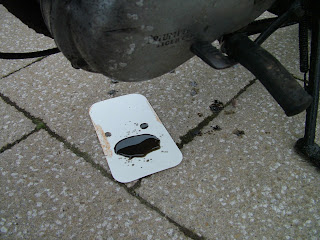 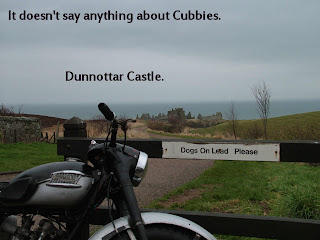 Hi honey, I'm home. Couldn't find my thermals on Saturday morning, which set me back a bit, but decided to wear two thick tee shirts and a big jumper instead, and finally got away, just a few mins behind schedule. I had been looking forward to riding Cubbie through Aberdeen, I just love filtering, pop pop pop bang!!! But then as I was heading to Aberdeen, I suddenly thought I didn't fancy the trek down the dual carriageway to the south, so we steered a course cross country, out to Inverurie, then Dunecht, Westhill and Peterculter, before crossing the hills on the Netherley Road and into Stonehaven - birthplace of the inventor of the pneumatic tyre, a certain R W Thomson, and don't let anyone tell you otherwise. They had a rally there each summer to commemorate the connections of the town to Thomson, never been but hope to get the club to go this year as we've been invited to have a club stand and to apply for the title of Club of the Year. The response from members so far though has been just a little slow....so come on guys! The rain had started by then, and the oil leak from the bit behind the primary chain case was humongous. Topping up the tank took over 300ml of my precious spare Q8 reserves, of which I normally only need a few spoonfuls for a top up, so I nipped in to the garage to get some more. But they didn't have any, and the lady I picked on to ask how far / how long it would take to get to Montrose has never driven a car in her life so didn't have a clue. Rain was still on, but I didn't care 'cos Dr Jim has fixed my lights and I can ride all day with them blazing away. Couldn't resist popping in to get some shots of Dunnottar Castle on the coast, then carried on, rattling away down to Montrose, where I would meet Smokey Child. He's from Arbroath but agreed to meet me in Montrose for the guided tour. We went down a 'no vehicles' pathway to a lighthouse, before wandering around the back lanes, past Lunan Bay and Red Castle ruins to Arbroath. The rain had gone but the air was full of a nasty grey drizzle, making my glasses huff up. Smokey certainly knows his local history, and took me to see The Ness at Victoria Park, the harbour with its brightly painted rows of houses and piles of creel (things) with the signal tower in the background. With the daylight fast slipping away (along with Cubbie's oil) we made one last stop at the birthplace of David Dunbar Buick, yep, that chap who went to America and made a few cars. Well I thought it was the last stop but Smokey had one more place to take me, Keptie Pond. A nice, peaceful setting, ducks and swans swirling around and the rain drops pinging down on the water. Generally what you might call a grey day, it was getting on for dark by the time we reached Smokey's abode, popped the bikes in the garage, Cubbie with a super size drip tray - I meant to say, the bike Smokey was on, was a rather nice 193? Panther, 250 I think he said. A really nice sounding chuff-chuff-chuffer of a machine.

Time for chocolate, back later.

Where was I? Oh yes, we got back to Smokey's place, and soon Mrs Smokey arrived home from work. She cooked up a super plate of fish and chips, followed by cream cakes, nice and healthy biker grub! Got a good sleep that night, despite the rain and wind absolutely hammering and howling on the window, and woke up to hear the birds twittering away outside. They were slightly misleading as the wind was still quite strong and bitterly cold, but after brekky Smokey and I togged up and set off on the bikes. He chose to ride his Suzuki V-Strom this time as the Panther would have trouble keeping up with Cubbie! We had planned to see a few more of the Forfarshire sights, but a combination of the severe oil loss and the not exactly enjoyable riding conditions, we decided to head straight to Shorty's house. Judging Cubbie speed is a difficult task these days as the cheap bicycle speedo that I bought has ceased to function and the original item is in bits, some bits are still on the bike and the rest are in a box in the lounge / workshop, so I had been going by the rate of charge. A fairly novel way I think you'll agree. I had somehow come to the decision that if Cubbie was charging at +3 with the lights on, in top gear, on level ground, then it must be close to 50mph, that's what it felt like anyway, but following Smokey, who was travelling at a very precise 50mph on his Suzuki, the rate of charge was only showing at +2. Hmmm, seems I was bashing on a bit going at +3, but it felt 'ok', I would have known if it hadn't felt 'ok'. We popped in to Glamis on the way for a few more pictures - you'll be aware that I had already been to Glamis on my Perthshire visit, but a malfunction with my photographic equipment meant I wasn't able to get all the shots I would have liked, so I got a few more, and who says I can't re-visit a county if I like, it's my game and my rules, so there! Most of the way to Shorty's we were riding headlong in to a gale, but hunching down over the tank and tucking my elbows and knees in tightly, aided by my rucksack performing as a racing hump, Cubbie managed splendidly. Of course, when we arrived, I got nothing but abuse from the two guys, they probably felt there was safety in numbers. Shorty even left Cubbie out in the snow! Poor ikkle Cubbie, goes all that way only to be treated like a second class motorcycle.

So that's Cubbie, half way to the Edinburgh show, and just waiting for a lift from Kawa on Friday. Then I'll have to work out how to get it home again. Talking of which, I came home on the train and was stung for £30 for a ticket. Not funny, I was expecting it to be a tenner, like it said on the website the previous day. Then the wifie at the snack bar tried to charge me £2.99 for a drink and filled roll, when the sign advertised it as £1.99. I only had £2.70 on me in cash, the cash machine charged two pounds for making a withdrawal, and the WH Smith kiosk didn't do cash back, so I snuck past the snack bar (where my order was waiting for me) and got some junk food from the machine, only to find 30p in the change/refund bit, which irks me somewhat because if I had checked in there first, I would have had enough to get my hot filled roll and a drink. Then the train was full of smelly stale people, there were no seats and I had reached my energy gap.

Still, Mrs BC laid on a corker of a roast dinner plus pudd to celebrate my appointment as Area Rep, followed by a box of Milk Tray, all to myself. And, the best bit, there are no horrible coffee flavoured ones.

Ok, that's the end, need to get a clutch puller to add to my tool kit so that when I get Cubbie back from the show I can fix the leak ASAP and carry on countying. I might stick a few more pics up tomorrow, and can you guess the name of the dog before then?

Thank you to Smokey and Mrs Smokey for providing shelter, food, help and hospitality.
Posted by Gorgeous Biker Chick at 18:50

Look like another great ride. Will there be more write-ups in OBM?
I didn't travel as far this weekend, only about 200 mles round trip. But my glasses never fogged, though I did ahve to ear my lightweigt shirts and gloves (over 80 oday).

another cubbie adventure, sound like you had some real fun.

Sounds like a great weekend dispite the weather. That's another chapter towards the book. Keep up the good work, I enjoy reading your blog,looking forward to the next thrilling installment.
Stuart.

Managed to get a loan of a bath to put Cubbie in for Thursday,lol

Darrell, you're such an old show off!!

You're not John, I don't think!

Thanks chaps, I haven't quite finished the weekends report yet, off to work now so hope to get it done at about midnight tonight.

Hey BC. I finally managed to get online again and catch up with your travels. I see you have been busy. Really enjoyed reading the last few months worth of adventures. Loved the Collie looking up at the camera, bonny dog.

I hope you manage to make it by your deadline in May.

The dogs name I would guess is Bamse,quiet a famous St Bernard ;-)

The wee bestie is "Bamse" and his statue is at Montrose. He is a dog with a remarkable story.
His full story can be read on bamsemontrose.co.uk Wonderfull thing ,Google isn't it!
Stuart

Well done Kawa, Stu, that's sort of cheating, but I'll let you off - don't do it again, ok? BigBob's probably going to be really cross with me as the only place I didn't get to go was the place that smokes the Arbroath Smokies, although seeing as I was in Arbroath and my guide was called Smokey Child...

Sorry Miss, I thought there might be a Gold Star for the first correct answer!
Stuart

Hey Stu, GBC would never give out a 'Gold Star' as that's a BSA thing,...she might get you a 'Trophy' tho'


You did say you'd take a Smokie home to Mum...

Fair comment BigBob,but you would think a 'chick' would have more interest in 'Bantams'. Still, better not upset her,she is a 'Bonnie' lass but I believe she can be a bit of a 'Tiger'(chuckle,chuckle!)
Stuart.

Is there a fish'n'chips place at Arbroath Abbey? The apprentice Biker Chicks seem to be partaking of same....or did THEY get some Arbroath Smokies? lol

Bit quiet in here the noo

Shorty dropped Cubbie off at my mates earlier tonight as I was running very late,looked a bit small next to all the Kwaks.Fer thought it was an early example of a monkey bike.lol.Not sure if i should say much more but Shorty did say something to Fer along the lines of it needs a good bloody clean ....

Sorry Kwak, been under the weather all week, hoping to be fit enough to make the long trek to the show though.

It doesn't surpise me that Shorty said that, he's just jealous.

Sorry Kwak, been under the weather all week


See, ya shoulda taken a smokie home to Mum...lol

Good day at the show,nice to meet you an Mrs BC.Hope you get rid of that man flu soon.

ps you weren't as craddit as I thought you would be,lol

Just stumbled across this site. What a brilliant idea. Happy to sponsor you. Hope to get back up to Scotland soon. Brilliant roads hey.

Doing the Bonneville 50th anniv celebrations in Gaydon in August on my Bonne first though.