It isn't often that Scotland gets a huge new bike show starting up. In fact, there aren't a lot of new shows happening anywhere really. So we're a bit lucky on that score. Have you heard about the new one at Lanark? Scheduled for the 12th/13th May 2012 at the Lanark agricultural mart, it's gonna be a showcase for all kinds of bikes and biking. Open to everything from veteran, vintage and classic through to sports bikes, tourers and customs. Competition machines are welcome too, both from road and off road disciplines; it is going to be HUGE. GBC will be there with a couple of Tiger Cubs, and hopefully the Grampian Classic MCC will be taking a stand, but I'm led to believe that there is still a bit more space for both private entries and club stands. Oh, and there's a big pot of cash to be won too - £100 for the best bike and up to £750 for the best club stand. What's all that about???? So if the cash isn't enough to tempt you, here's a sample of the attractions over the weekend.... SCOTLAND'S 300MPH SPEED MACHINE JOINS SHOW LINE-UP Among the attractions already lined up is the Flower of Scotland streamliner, which has been built to achieve more than 300mph on a one litre Kawasaki ZX-11 motorcycle engine, and a rally car once driven in competition by Colin McRae. Also confirmed as appearing are Scots road racing greats Donnie McLeod and Jim Moodie. McLeod was a star performer on the Tarmac during the 1980s while multiple TT winner Moodie enjoyed massive success during the 1990s, including becoming the first rider to lap the Island course at over 120mph on a production bike. Dozens of clubs and trade exhibitors are already booked and visitors can experience the sights, sounds and smells of classic racing bikes in the event’s GP paddock. There will also be a scrambles track with demonstrations by the riders of the Scottish Classic Racing Motorcycle Club. Anyone who’s wondered whether they’ve got what it takes to be a trials rider can find out at the show’s trials area and firefighters from Strathclyde Fire & Rescue will be demonstrating their ‘jaws of life’ equipment on a couple of unsuspecting car roofs. You can get more info on taking a stand or showing your bike off at www.classicbikeshows.com or on the good old fashioned telling phone - 01507 529430
Posted by Gorgeous Biker Chick at 13:46 4 comments:

It's a sad, sad day, so it is. I got a nasty letter from the Government telling me that, shock horror, my Triumph Tiger Cub, aka Cubbie (they didn't say the aka...bit) is not showing on the vehicle insurance database. My options were to purchase some insurance for it ASAP or SORN it. Or I would be fined! Well I didn't fancy the fine and seeing as I've just had to tax the car, and last month saw me shucking out tax and insurance for the snow-busting-4x4 (which, incidentally, is a bit redundant in these bizarre March weather conditions; 18degrees C here today), I opted for the free option, to SORN my beloved little Cubbie. And that came just after I'd told Ex-Pressy Bill that Cubbie would soon be out on the roads for a spin in this lovely Scottish sunshine.

I feel a little ashamed but all the time and effort I'm putting into The Cub Mag at the moment means I don't have much free time to actually ride my bikes. And besides, it's better to spread the cost of these things, don't want all the motoring bills landing on the door mat in the winter.

Talking of The Cub Mag....issue one is looking good, just waiting for the Editor to write her few bits then it'll ready for a proper proof read. Still a little bit of room if anyone wants to pop an advert in the first issue - preferably something Cub related - know of a good Cub parts supplier? Someone you can recommend? Let me know. gbc AT thecubmag.com
Posted by Gorgeous Biker Chick at 23:07 12 comments:

Just in case anyone is interested....this little bike is up for sale in Aberdeenshire - 1974 Ironhead, all original. £3000 Email gbc AT thecubmag and I'll pass your details on. 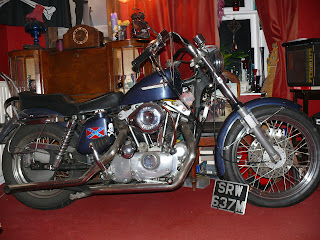 Posted by Gorgeous Biker Chick at 15:35 No comments:

Well, it must have been MONTHS, about 6 or 7 months since I last peeked at the Terrier project which is now struggling to be seen under rags and junk on the bench. I nipped into the shed for what was supposed to be a very strict ONE HOUR, but it took all that time just to re-acquaint myself with where I'd got to last time - so the second hour was spent measuring bushes and springs and such like to see if the wear was acceptable - it's not. Darn. I also had a rummage through the brown jiffy bags on the shelf, and found a set of brand new clutch plates that the very nice Joe Gray from Shetland sent me last year (he's had them in his shed for I don't know how many years!), and then ceremoniously unwrapped the box that Ex-Pressy Bill had sent me a few weeks ago. I'd peeped in the box when it first arrived, but was under strict instructions not to open it fully in the house. And now I can see why! Two rear suspension units, for a Terrier of course, all greased up and covered in stuff that Mrs BC wouldn't want on the carpet or even the kitchen table. Some parts of those will be salvaged and added to the new gaiters I found in one of those brown jiffy bags....bought them at Stafford and sort of, erm, forgot I had them - but between them, they will add up to two usable units.

This little stint in the shed was on the morning of a Grampian Classic bike club night, so I thought I'd take one of Terry's wheels along to the club, just for opinions and maybe advice. I plonked it down on the table while our man Tom set up his astronomy equipment for his talk. Captain Bill advised that the wheel is perfectly serviceable, never mind the few slightly bent spokes, and another member, Alan H, very kindly offered to take it home and blast the old chrome off for me, so that I can - you guessed it - paint it. Nothing wrong with a painted rim. It's a budget measure, and as we all know, we're living in budget measure times. So that's great, the sprocket appears to be ok too, although given a big pot of cash I'd rather buy a new one to go with my new chain; I suspect one will appear on my Stafford shopping list, along with a pick 'n' mix of nuts and bolts, and oh, there was something else I had to get while I was there - can't remember it now though.

What can I say, other than GRRRRRRRRRRRRRRRRRRRRRRRRRRRRRRRRRRRRR. Even with internet quotes you still end up having to phone numerous insurance companies to get the full spec and the discounts. Feels like I've been on the phone for the last two weeks - maybe I have and thats why I haven't updated the blog!
Posted by Gorgeous Biker Chick at 15:18 4 comments: