So there I was, enjoying the sunshine at the Alford autojumble, when Short Stan came up to me and said my last post here was crabbit. Now, how does that saying go...."it takes one to know one" or something like that! Actually, to fill you in, Stan and I have a bit of a war going on, he started it and now it just seems to run and run, but I just love banter like that. It's not often I meet someone who can stand up to my sense of humour but these bikers seem to be able to. The jumble was a good chance to meet people I hadn't seen for a while and catch up. I also spent all my pocket money on a selection of spanners, files and screw drivers. Lunch was a treat too, in good company and with good chat, although the cup of tea Mrs Bikerchick had was more akin to dishwater.

Poor puppy has a poorly paw. He clattered into a bit of rusty tin the other day and sliced one of his pads open. He didn't seem to notice at the time - he was able to carry on chasing sticks and stones, but for the last couple of days he's been suffering with it.

I keep marvelling at the wonders of modern technology combined with old bikes. My friend Diggy in New Zealand is a constant source of help via instant messaging, I don't want to embarrass the poor old chap but go check his blog out, it's way more interesting than mine. http://www.sportanduniform.co.nz/wrinklyracing/index.php

Got a bike test lined up for this week, on a nice little AJS. This will be my first AJS experience so fingers crossed the weather picks up.

I've just discovered that I can upload video clips to the blog, and rather fancy popping a vid of the Cubby in full flight on here, just to prove that it does really go. Trouble is, I don't have a suitable recording device.

I'm hoping to get to Knockhill next Sunday for the Jock Taylor memorial races, anyone else going? Look out for me and say hello.

Right, I'm off to do my nails, hope this post wasn't too crabbit for y'all.
Posted by Gorgeous Biker Chick at 23:42 No comments:

It takes all sorts... 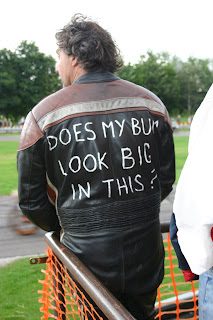 A bit of a mixed bag this time. Last weekend I popped over to the museum at Alford to meet the riders who had taken part in a charity fundraising ride for UCAN. They had started from Balmoral and ridden a timed route to Alford, and I have to take my flame coloured helmet off to them for doing so. Did you see the weather that day?? It was chucking it down 99% of the time, and some of the hardy rufty tufty lads only had leathers and shoes - as opposed to waterproofs and waders! I think about £900 was raised. Tuesday this week I had to get the late train to Glasgow for a work briefing. I could have got the one 3 hours earlier had my 6.30pm appointment had the courtesy to let me know she wouldn't be in, again. I mean, what is it with people? How hard is it to pick up this wondrous device called a Telephone and make a 2 min call? And this lady is a teacher, so no wonder the next generation are growing up as they are. Call me an old grump then, I don't care. I have never experienced such a dull and boring day, well, not since the last briefing, and what's wrong with the people down there? It was roasting, the sun was blazing through the window and they all had woolly jumpers on and wanted the window shut! I was sitting there in a T shirt (and a few other items of clothing of course) and was too hot. I dunno, the soft south, that's what it is. Sitting at the station I was treated to more examples of humans doing what they do best; single mindedly going about their business with not a thought for anyone else. Woe betide an innocent pigeon who hopped in the way. Or an old lady who was lost. I hate being in a city. Although there were some rather good displays of something I think is called 'fashion', if you call turquoise tights, red shoes, three quarter length blue troos and a yellow jumper fashion. Maybe the lady wearing two satellite dishes on her eyes had it right.
********************************************************************************
I really need to get on with putting the shed up (volunteers apply here...), as the MZ is going to need a lot of work this winter if I'm to ride it to places as exotic as Spain (and maybe Italy) next year. It passed the MoT last week but I did get a couple of warnings about wheel bearings and shock bushes, plus I'd really like to sort out the oil drinking problem. A nice chap in the MZ club has given me a few ideas on how to eliminate certain things, but one thing I have to do is take it for a long ride. Not usually a hardship but it always seems to rain on the weekends, and I don't fancy using it with the ContiForce tyres on. Call me a girl but they seem to be affa slippy in the wet and I find that scary! So, off to the autojumble this weekend, also at Alford. Wonder what go-faster bits I can find to bolt on to the Cubby!
*********************************************************************************
And finally, I must mention the sad loss of Colin and Johnny McRae. You've all heard about it by now, but I felt it should go on the blog and I've added a link to his official website so anyone wishing to post condolences can do so there.
**********************************************************************************
And finally finally...GBC's blog has hit and long since passed the 1000 hits which is greatly surprising, not to mention much appreciated. When I put my first post up I didn't really think anyone would be even slightly interested.....so thanks for looking...don't forget comments always welcome!
***********************************************************************************
Er....finally, no really, finally...I took the Cubby out of the van where its been living (no room in the shed cos some untidy wifie has left her junk scattered everywhere) and after not having used it for ages...it fired up first kick. Big grin factor that!
Posted by Gorgeous Biker Chick at 08:42 2 comments: 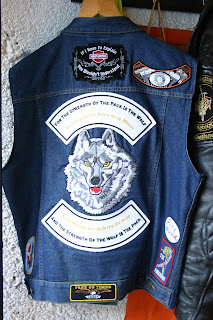 Some sad news in this post I'm afraid. While the fun time everyone had at the Grampian Motorcycle Convention last weekend is still fresh in the mind, I received an email from a friend in Shetland yesterday telling me that Colin Fraser - he of the Shetland Islands Cruiser club had died. He and his wife had just returned from a trip to France via the Harley bash at Aviemore with a few friends, and due to having got soaking wet and very cold in Germany, Colin stopped off at the hospital in Lerwick, suffering from pneumonia. Sadly, he never went home. I only met him a few times, yet feel like I knew him for years. I was privileged to have been invited into his circle of friends, and to have been made an overseas member of the SIC. Thanks to his family for contacting me, anything I can do to help, you know where I am. RIP Viking, have fun up there.

Giving us a bad name. 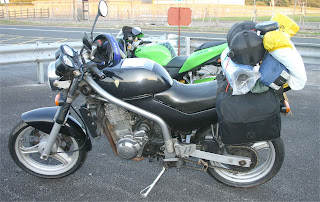 Well here I am, home from the Isle of Man, totally skint, totally tired and left with mixed feelings. I suppose every holiday has ups and downs, but to set the scene, just before I left, I was mid way through changing my bank account, so was left with just a few pennies in the box under my bed for spending money. The worst of it was I'd had to cancel my direct debits and couldn't pay my bike insurance. This wasn't exactly the best way to start the trip. Still, the insurance didn't run out until I was on the island so at least I could get there legally, and my trusty MZ Skorpion carried me all the way there (and back) without complaint. I think total mileage to and from the ferry was about 700 plus another couple of hundred on the island itself. That equates to a lot of petrol and more importantly oil. On the way to Heysham, a nice lady tried to take me on at the Haudigan (sp?) roundabout in Aberdeen, then she smiled, waved and drove off. Then a white van man attempted to run me off the motorway - three times! When I got to the ferry terminal, I met up with a friend from my school days, Sandra. She rides a green Kwakkysakky machine so was easy to spot. Arriving a few hours early we popped into a nearby pub to thaw out and dine. The only seats available were next to where the band was setting up, so after a few people cleared out we moved to the far end of the pub for some peace and quiet. A good move as it turned out for that was no band, that was karaoke! A pack of cards was then produced from my rucksack, the intention being to pass the time playing snap (we would never even considering gambling), but how can you play snap with 23 nine of hearts cards? Perhaps we should have gone home then. The crossing was uneventful, apart from waking up to find a man sitting staring at me at some hideously early time in the morning. Arriving at the campsite I pitched my tent (Sandra's was ready pitched for her, cheat) and we got a stern telling off for waking people - come on, it was 6am for goodness sake! Probably Sandra jousting with a lilo that did it.

Throughout the week I was most disappointed by the behaviour of some of the motorcyclists on the island. Ok, some roads don't have a speed limit, so if you really want to, you can go up to the Mountain and try and wrap yourself around a fence post, but surely when (if?) you get back down to the villages and 50mph limits, you can ease off the throttle. People actually have to carry on with their daily lives while we're there on holiday, and I felt so sorry for an elderly lady trying to cross the road with her dog, but she couldn't because of bikers riding like idiots, overtaking, and filtering in twos and threes through her village. Sadly it wasn't always plastic rocket riders to blame.

Ok, I’m off the soapbox now and would like to report that the Vintage Motorcycle club events I went to were great, and the Triumph owners club meeting that clashed with a Norton meet was also pretty good. The weather held fair most of the time, apart from when we were on a late night mission to deliver a kebab to Sandra’s boyfriend who was drinking all the pubs in Peel dry. I never did get to do a full lap of the TT / Manx course, but can’t say I’m terribly bothered, it’s not going to disappear. I might go back and do that next year on the Cubby.
Talking of which, I’d better give that the once over in preparation for the Grampian club run tomorrow. Oh yeah, Mum got locked in the bathroom today. I tell you, I go away and what do I come back to? Chaos! Look out for the full report (of the Manx events, not the bathroom saga) in your fav old bike mag.
Posted by Gorgeous Biker Chick at 16:10 No comments: