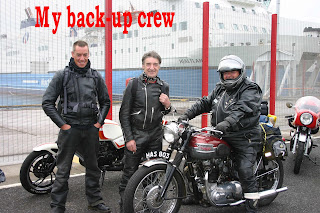 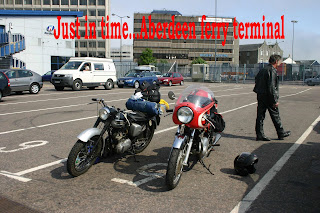 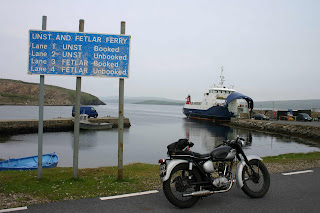 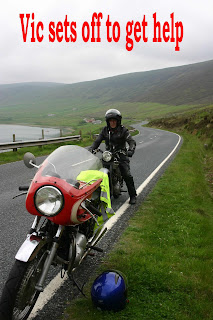 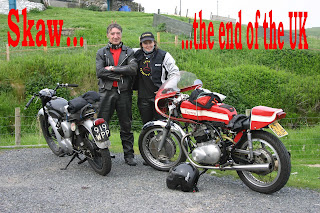 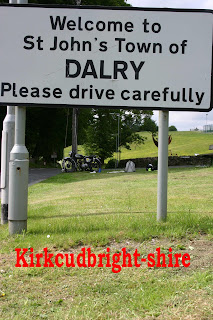 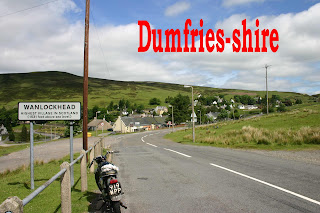 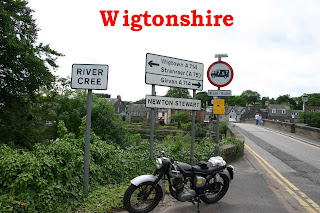 Ok, here is a condensed version of the Shetland Saga. Wednesday afternoon I mixed and applied the Petseal to Cubbie's tank after carefully plugging the fuel tap hole with a bolt and wrapping the filler cap in plastic. I read in the instructions that it must be in an environment of at least 21degrees to cure, and left a minimum of 12hrs before filling with petrol. Hmmm, best pop it in the greenhouse then. Instructions also said to remove bolt when the mix was tacky so I did, only to find that the darn thing wasn't long enough and the hole was nicely sealed over. Not to worry, thought I, it would easily drill out. Thursday morning, find a small drill bit, cover it in grease to collect the swarf, start drilling. Ooops, small problem, seemed to be pushing the Petseal away from the tank base rather than drilling through it. Quandary; do I push it some more to snap it off, or just shove the fuel tap in and cross my fingers? Option one seemed most thorough and it snapped quite easily. All I had to do then was remove a chunk of the stuff about 6" x 4". Nearly 12 o'clock, two hours before I had to leave, finally got all the bits out with pliers and ready to fit and fill, albeit an hour earlier than officially allowed. No leaks, success! On to the points which needed to be cleaned and gapped after it had been running a bit 'odd'. Popped a new plug in too but checked for a spark and it seems to be a duff one. Lucky I had another spare. Almost attempted to do the tappets too as they're a bit rattly these days but time was ticking by and I wasn't confident I could get it right in a hurry, even tho good ol' Diggy was talking me through it all the way. Time to pack and get gone. Mind you, while I was doing all this, Mrs BC was keeping an eye on a ewe ready to lamb at any moment, hoping that she wouldn't get milk fever and need an injection.

1.30pm came and went and I wasn't quite ready, then Polly / Poppy (they're twins and we never know which is which) did need to have some medication so I didn't leave 'til 2pm. Told Vic to go ahead without me as the poor chap wanted to meet at 3pm. Parked the van in Aberdeen, stacked the luggage on Cubbie and sped over to the ferry, just a few mins late and caught Vic before he'd gone on board. 13 or so hours later we rolled off in Lerwick to a grey drizzly kinda day. Met me old mate Joe Gray, head honcho of the bike section of the show, and some of the guys I'd bumped into last time I was up there, nice to see them all again.

Davie and Mike from the Grumpy club (Grampian Classic MCC) set off to their hotel while Vic and I headed to the Clikimin campsite (who gave me a very good deal btw so thanks to them) and pitched our tents - we're real bikers you see, just got them up and the kettle boiled when the rain came on, and who should appear from a misty cloud but Geordie of the Ariels! He'd just dropped Mrs Ariel off at the show (that's his VB Ariel in case you're wondering!) and stopped by the campsite (a 30second walk from the show) to say HI. Vic and I decided to head north to Skaw which I believe is the most northerly (inhabited) point in the UK, while our two hotel-staying companions wanted to venture west, so we went our separate ways.

Vic's Triamaha started misfiring just out of Lerwick, not a good sign at the start of a 100 mile round trip! New plugs seemed to help so we set off again. 20miles further on and he glided to a halt. Checked everything we could, no spark tho, he seemed to think it might have been the little black Boyer box recently fitted, by Mr Prodger in our club. Phoned the AA in despair. Bad signal, kept asking him for a street name, cut off in the end. Waited a bit to see if they would arrive but didn't so sent him off on Cubbie to the nearest house to call again. Had a poke around at the wires meself, saw the main lead from the black box was dangling down beside the rear wheel, noticed the rubber bit from a bullet connector was embedded in the tyre....hmmm...other end of that connection seemed to be dangling too....hitched 'em up, switched in on, ticked the carbs, gave it a couple of kicks and voilà! Should have seen Vic's face as I turned up outside the house he was at! Lovely couple, Tony and Beth, insisted we stop for a cuppa and a chat before heading off north again.

Shetland is made up of many isles and to get to the north tip, two ferries are needed, Toft to Ulsta and Gutcher to Belmont. You pay £6 on the first one, and that covers you for the second and your return journey too. As luck would have it, each ferry was waiting for us as we rolled down to the harbour. Cubbie was going well although the tappets were a bit on the loud side and the Triamamamaha seemed ok now. Made it to Skaw, looked at the beach and nice scenery, had our photo taken by a tourist then set off south. Talk about whistle stop! Pulled in to the local shop to get Victor some ciggies (he went through a fair few whilst broken down) and swapped bikes. His idea of a reward I think. He roared off, up to 70mph in no time, I had to whizz past and slow him down, he's a bad lad. Poor Cubbie! The Triamaha is made up of a Triumph T100 engine in a Yam racing frame and is a nice ride, even though the throttle is way too heavy for me, nearly pulled my arm out trying to hold it at 60mph. Oh, kept hitting my shin on the kickstart too. Anyway, got back to the tents and picked up fish 'n' chips on the way. Met up with the other lads in the pub and supped water all night.

So Saturday was the day of the Shetland Classic Motor Show, over 700 exhibits from bicycles and stationary engines to trucks, tractors and bikes of course. Renewed acquaintances with the likes of Maurice, Carol, Robbie, Geordie and Joe again and heaps of people who names were there then but gone now! Sorry! To everyone I met, t'was lovely to see you all again, and thanks so much for sponsoring me, tis really appreciated. Much more about the show in Classic Bike Guide soon......

Saturday night saw me back on the ferry while the guys stayed for the second day of the show. 7am Sunday, rolled off to a sunny Aberdeen, squeezed Cubbie in the van, and ok, so I cheated, but given the logistics of this run, I had to be at the Ayr classic show in time to cover it for the mag, and to dish out the prizes in the afternoon, and tanking down the main roads on a 40year old 200cc motorcycle for 150 miles isn't on my list of things to do! Arrived in good time even though the brakes on the van were sticking on quite badly (fuel consumption was baaaad), did my bit there, again, met loads of great people all of whom fished out their spare change for Cubbies Counties. Also got an offer of spanners / help / trailer in the fife area from a couple I met a year or two ago at the show.
Posted by Gorgeous Biker Chick at 11:51

It was an absolute pleasure to meet you and your bike in Shetland. Come back again soon.

G'day GBC....hey it's Skud here from the land of OZ..you may recall I requested some info. on Daytonas..well I've decided I'm for a Cub....so I would apreciate it if I could talk with you about these bikes and in particular about a bike that Mike Powell has for sale...is that you on the Triumph Cub site...looking very cooool....would be most appreciative if you would contact me at projagonant@hotmail.comthanksIan Smith

Hi GBC - Great to meet you in Shetland. I thought Cubby stood up well beside all those H-Ds, BSAs, Nortons and the like. Good luck on your great quest.

Ron's book (Between Weathers) sold out and we made lots of new friends so all good. Stay in touch.

Come on Ms Chick, get this blog up to date!

Hello Gino, nice of you to drop by, but I'll have you know this blog IS up to date! Oh, and I deleted your second comment seeing as it was jut a repeat of thefirst...hehe!

Thanks for all the other comments chaps, nice to know you're out there reading.

Great Pics!! Really like the Triamaha...oil tank in the back of the gas tank? Clean...Good going.

OK Gorgeous biker chick - gauntlets at dawn. My other half reckons you are indeed gorgeous but can't track down a photo. Secondly, as a biker virgin, do you have any advice on how to keep the bugger upright? Attempted a CBT but failed due to major gravitational pull - 3 times to be exact!!! Have the leather, have the helmet, want to ride but how the hell to keep the thing up? Comments on both appreciated. Yours, Gorgeous Classic Chic