And it's another big thank you to two more kind supporters of the Gaffers Gallop - Brake Man Ken, who supplied some brake linings for two of the bikes and MacSigns in Edinburgh who have offered to personalise some hi-viz gear for us riders of slow little old motorcycles.  Pop over to their site www.mac-sign.co.uk for details of the work they can do - house signs, banners, vehicle signs and more! 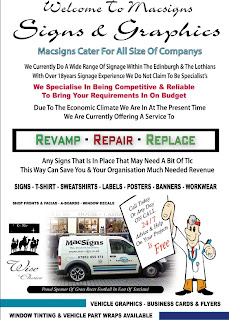 Posted by Gorgeous Biker Chick at 22:43 No comments:

More support for the Gaffers Gallop!!!

On the 7th day of October 1953, Edward Turner and Co, lunched at the Old Bell Hotel in Malmesbury.  No idea what they had to eat but I don't think we need to go quite that far in the authenticity stakes!  Well the good news is that the hotel (which is the oldest hotel in England) will be our lunch stop too, on the exact same date, sixty years on. 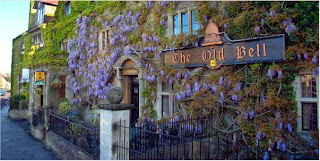 Just to update you on the route, we will be starting from Roche, near Bodmin on the 6th Oct at 11:40hrs and riding to Land's End, where hopefully there will be a spot of lunch waiting for us, and then we'll head up to Exeter for an overnight stop.

Day 2 will take us from Exeter to lunch at the Old Bell, and then on to Leamington Spa (Turner arrived there at 16:05, I wonder how exact we can be in our timings!).

Day 3 will be the second longest leg (246miles), from Leamington Spa (depart 08:00) to Appleby for afternoon tea, and then on to Carlisle by 18:00 for an overnight stop.

Day 4 and the miles will be stacking up, along with the saddle sores, and it will be Carlisle (08:00) to Perth for lunch, and then to Inverness for the overnight stop - apparently arriving there at 18:30.

Day 5 will see us (hopefully) depart Inverness bright and early, ride to John O Groats for some photos (12:00), and then complete the run by returning to Wick.

As mentioned in Old Bike Mart, we are still welcoming any Terrier and Cub owners who wish to come and do the whole route, or even just part of the trip.  If you ride any other bike, you can still come along and wish us well, wave flags, throw money and chocolate at us, hand us oil as we ride past.....oh, talking of oil....

Andy, supplier of Millers Oils, has kindly agreed to sponsor the 5 bikes doing the whole trip of 1008 miles.  He has plans to try a few experiments with different engine and gear box oils for the different bikes, in order to be able to suggest and provide a good choice of oil to the Tiger Cub or Terrier owner in the future.  He was shocked when I said I run Cubbie on 10/40 cheap oil from the supermarket.....

Someone who also deserves a special thank you for their continued support of the Gallop is Barry the Frame Doctor.  He has helped fix up Terry's frame and now he's been lumbered with a similar fix to Yorkie's frame.  Thank you Barry, your help is much appreciated, and don't worry, we won't tell anyone else your phone number!

So, after I set up the countdown clock to remind us all just how long it is until the Gallop, Muckle Flugga Man started to panic, ran to the shed and started cutting threads on his saddle springs, he fitted his new Mitas tyres to his shiny new rims from Greystones, marvelled at the shiny new head nuts that they sent too, and generally got a few more little jobs done to Yorkie.  I, on the other hand, took all of Terry's boxes of bits outside and tried to work out what I've got and what I need.  The list of 'need' isn't as bad as I thought, but one little task that's puzzling me is how I'm going to fix the tank badges on as there ain't no brackets and it's been painted up all lovely now.  Maybe I'll hand paint TRIUMPH on, instead? 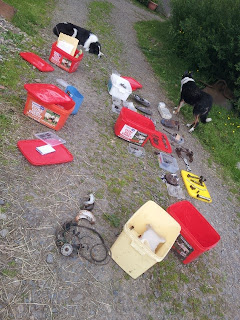 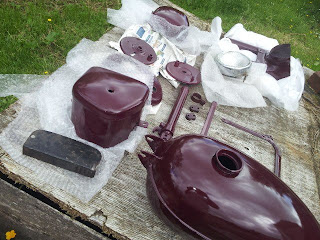 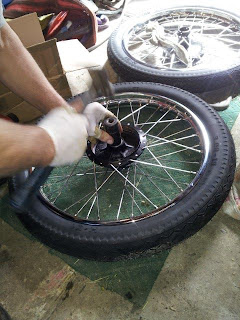 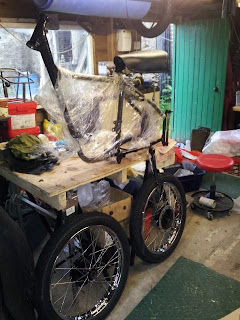 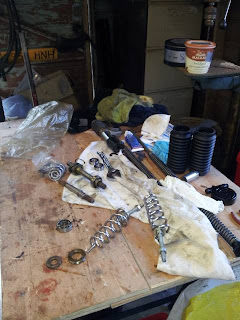