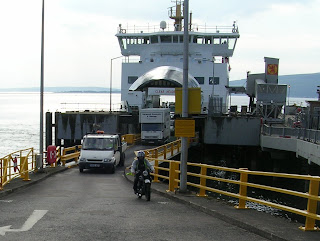 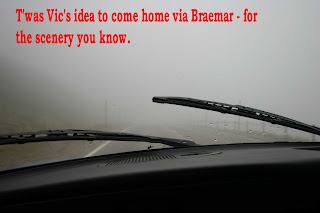 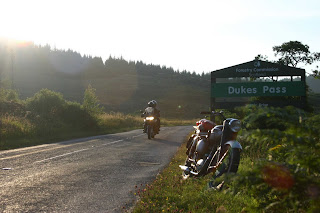 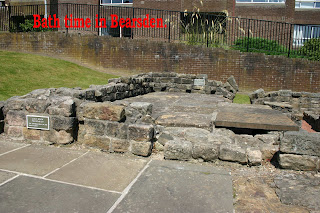 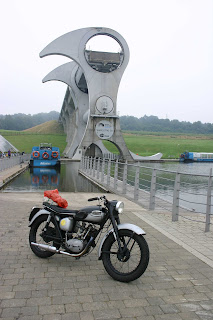 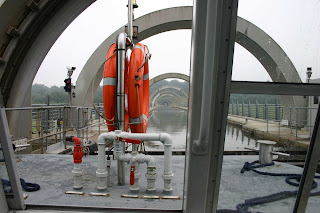 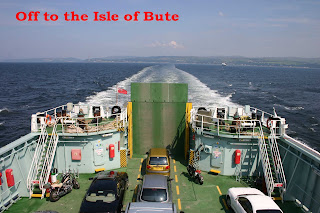 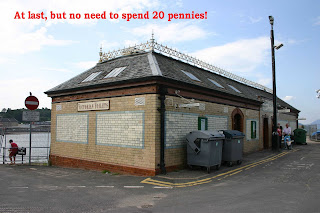 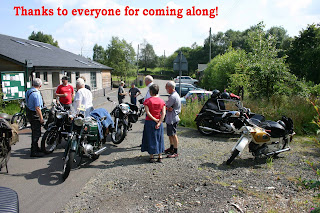 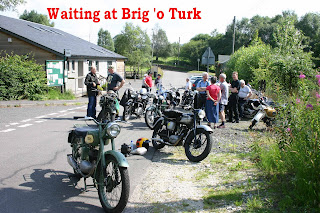 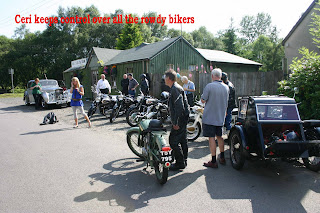 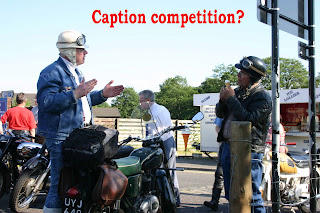 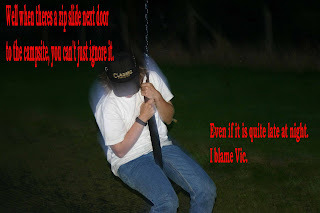 Friday last week, Captain Bill arrived to finish the trailer but minus his electrical extension lead. I have one, but it was in the car, which was at the garage having a burst rear brake cylinder replaced. Oops. So hauled Cubbie out of the shed and kicked it over...nothing...not even a puff. Tried and tried again and again but with Bill watching it was never going to start. Jumped in the van and whizzed down to get the cable. Spoke to the mechanic about the car brakes - whats up with them then, said I, whats right with them, said he. Ah! Might explain the persistent warning lights on the dash.

Saturday - usual farm stuff, checking and dosing lambs, preparing for being away for a couple of days. CLEANED CUBBIE'S EXHAUST. Hope you notice this when you see it on TV because it took hours and hours. Started up first kick.

Drove through thick mist and heavy rain on the way to Aberfoyle. Bearing in mind that we were going to be doing the aeriel filming, it didn't look promising. Arrived an hour EARLY so no need to panic Vic. Sunshine was beating down, then heaps of bikes turned up - unfortunately two of the guys couldn't make it on Tuesday so they'd had a wasted journey but it was jolly good of them to come along.

Now, at this point, I have to leave you hanging while I write the next bit, then submit it to the director of Britains Best Drives - the BBC programme we were there for - to get his approval (or not?) to publish detail about the shoot.

So what we'll do is carry on with the Cubbie's Counties story and come back to the shoot later. Monday morning, had arranged to meet Kawa from the Scottish Classic MCC (website down chaps? or just me locked out?) at the Falkirk Wheel in Stirlingshire. Vic decided not to tag along as his Bantam would be too slow for Cubbie. Quite right too. Misty again, didn't get toooo lost, although the directions from a traffic warden didn't help much. Nearly ended up going right through Stirling but noticed just in time and took the bypass. It's quite tricky gadding around the country in areas I don't know, avoiding motorways. Not just because I wanted to see more of the countryside, but Cubbie is actually too small to ride on the M'ways legally. Somehow made it to Falkirk, and lets just say the wheel isn't terribly well sign posted. Met Kawa and just scraped in in the nick of time for the first trip at 09:50. Despite the mist still hanging around, the trip was quite good. The wee boat sailed over to the gondola, then slowly we started going up and at the top, we sailed along the aqueduct and the Union Canal - some 35meters up in the air, quite an interesting feeling. Next we approached the Roughcastle Tunnel which took us under the historic Antonine Wall - they didn't want to destroy it when they built the wheel, so simply went under it. The tunnel is 180m long and lit up inside. At the other end is a huge puddle for turning, or for those serious sailors, there are two lock gates to be negotiated to take them further on their journey to either Edinburgh or Glasgow (er, have to check that one, its either one or the other!). After turning, it was back to the gondola and a 15 min descent to the visitor centre for a sausage roll (brekky) before setting off again. Big thanks to Kawa for funding that part of the trip as his contribution to Cubbie's Counties - and brekky hehe. Left on time, about 11am I think, and pointed Cubbie West, to the county of Dunbartonshire and specifically, the town of Bearsden to view the Romans bathing. Under the M80, on to Banknock, Kilsyth, Queenzieburn, sticking with the A803 before branching off onto the A807 and on to Bearsden. Found Roman Road and Drive, assumed the baths were somewhere nearby and unbeknown, kept riding right past. Not much to see there really apart from a few piles of rocks with plaques stating that they were once washing / drying / heated / cooling areas. But that was another county ticked off and it was straight back on the bike and over to the Erskine Bridge in Renfrewshire. Stopped on the other side of the bridge to assess the situation and a nice chap pulled up in his car wondering if everything was OK. Mist had cleared long since and decided it was time to get the sun cream out. Even through a tinted visor I seem to catch the sun if I'm travelling for a long time. Wanted to visit India of Inchinnan but was running out of time for the ferry to Bute. Yep, the ISLE OF BUTE was next on the list. So all of you who pledge extra money for an island, time to pay up! It looked like quite a trek to Wemyss Bay to catch the ferry, and I'd planned to avoid the M8 (which I managed) and hop on to an unclassified road to avoid the A8 too (which I didn't manage). Didn't really miss the turning, just couldn't find it so ended up on the dual carriageway. Met a dog running around half way towards the Newark Roundabout. Couldn't just leave it there so took the next exit looking for a police station, found a dentist surgery instead so got the number for the cop shop and informed them. Carried on through Port Glasgow, lots of nice architecture going on there. Rolled up at Wemyss Bay just before 14:30 and was able to hop right on the boat. Bit shocked to be charged over £20 for a return though. Tis only half an hour each way. Landed at 15:15 planned to visit the Victorian loos then get he next boat back. Couldn't find them so went standing stone hunting, couldn't find them either. Realised I was too far away to get back for the 16:00 sailing but tried anyway and got there just as they were shutting the door! Was feeling slightly crabbit by then, made worse by spotting the loos right down by the ferry terminal. 20p to go in though, just for a look, so I asked the chap if I could take a peek and he was quite rude saying it was 20p madam. Right, fine, well I'll look on the internet then. (Found a piccy here - http://www.ineedanimage.com/product_Rothesay_Victorian_toilet_Block_1461.aspx)

Caught the next ferry, due to arrive at the mainland 17:20, texted Ronnie, aka Bantam Cub Man to organise meeting him there to collect the fork legs he has kindly donated to my Cubbie Repair Fund - hopefully they will allow me to actually put some oil in the forks for a smoother ride. He also treated me to what should have been lunch but I guess at after 6pm it was more like tea. AND he reminded me of his £1 per county financial sponsorship that is to come to my way if and when I complete the task. Phoned Vic to let him know I'd be 'home' for tea at the pub in Thornhill about 8pm. Had to stop for fuel, stuck in about £5, not bad seeing as I put £7 in on the way to Aberfoyle for the filming. Pleased to see the dog from the A8 had gone and there were no lumps on the side of the road. Trundled back to the Erskine Bridge, on towards Milngavie then north to Carbeth and continued on to Craighat, then right to Killearn and up to the A811 where my map ran out, but luckily I spotted a sign to Aberfoyle, and knowing Thornhill was just down the road from there, thought that would do. Arrived at the pub in decreasing daylight at 20:30 to a raptures welcome from the guys at the bar - they all popped out to look at Cubbie and duly filled my sponsorship form in - raising the total now to £938. I have to say also, that the grub at the pub - the Lion & Unicorn is absolutely yummy, just what was needed after 195 miles in the saddle of a rigid bike and near enough 8 hours on the road. Time for bed, worn out, busy day ahead back at the film shoot.....

'...and next week we're filming The Karate Kid.'

"...and then GBC rode by and missed grabbing your ice cream by this much"

Actually, I thought 'Victorian Loos' would be a row of pots...

it just gets better BC ... love the pics.

Glad to see Cubbie managed the trip ok on Monday.By the way once you go through the two upper lock gates you're on the way to Edinburgh.See you about,cheers

You are allowed on the motorway with Cubbie, it is over 50 CC. As to whether you should or not is another matter entirely, I certainly wouldn't!

I'm impressed with all this travelling and really enjoy reading about it.

D'you know, I was thinking that Mark, but it was a traffic warden who told me and I didn't like to argue with him! Would have been ok for just a short burst, but wouldn't do it from choice!

Glad you're all still enjoying the read, loving yor comments!

Yes, defo legal for UK motorways - I use the M77 in Ayrshire regularly. Cubs are quite happy sitting at 50-55mph which is no slower than some trucks so don't see any problem.

Guy in the white helmet says "I can eat as many of those as I like cuz after midnight my gut slides down and turns into willy".