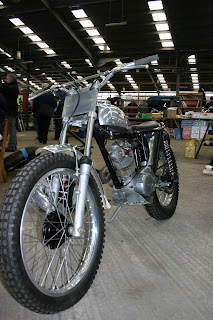 With a few ups and downs on the farm last week, it was good to get away to the long awaited Perth Autojumble on Sunday. Organised by the Central Scotland Section of the VMCC, Short Stan has been nagging at me for a while to pop down and see how a real jumble is run. With the Foil in the Oil saga out of the way, I grabbed my thermal tee shirt and slung it in the ruck sack before heading off south at 9am. The good old Skorp was running well, although I'm still not really happy with the ContiForce tyres I'm using, either that or the worn bush at the bottom of the shock is playing with the handling a bit, because corners just don't seem that stable these days. Anyway, by the time I got to Aberdeen I had to stop and put the thermal on (good job Asda is open 24/7 these days) and fill up with petrol. Through the toon and out on the A90 the traffic was light, and soon the turning to Coupar Angus appeared. All was well until I got to Perth, and tried to follow the directions that a little short bloke had emailed me. To cut a long story of dead ends and one way roads short (no pun intended) I eventually found the car boot sale at St Johnstone's football ground. I must just say the toilets there are astonishingly foul. Some time later I ended up at the Agricultural centre where the Autojumble was... No sooner was I there then a crowd of hunks approached and started chatting about this 'n' that. Shorty crept up whinging that I was late and had therefore missed lunch - I suspect he sent me duff directions so he could get out of buying.

There were a few stalls outside selling spray paint and rusty Nortons (are all Nortons rusty, Gino?) But inside there was a CUBBIE in trials trim, but the guy wanted £1800 or thereabouts, a wee bitty out of my budget. A quick wander round and I spotted 3 boxes of Cubbie bits in the auction, but the only bit I needed was the primary case outer cover. The bidding went to about £50 so I didn't bother with that. The guy who was sitting next to the guy who was next to me said he has one in his shed tho.....so I might be lucky yet.

Dave Stewart took pity on me and treated me to lunch, I musta looked all weak and thin, and er, some time later, chatting to Graeme from the Scottish classic club, I must have looked all thin and weak 'cos the kind man that he is, Graeme then treated me to a late lunch. Good job too cos it would be hours before I had any more food.

Meester Rondelli (I think that's how to spell it) was there, so was Hugh from Mintlaw and his mate, both of whom used to do a lot of moto X in their day, George Mair from Aberdeen was spotted but ran off when he saw me, unlike Vic and Bob from the Grampian classic club with whom I had a nice chat. A guy on a BSA recognised me from the mag so we talked about this and that.

Oh John H, how could I forget you! We bumped into each other (but not literally, as he has already stated on another website just in case there is any confusion) whilst browsing. I meant to ask if you wanted to join the Grumpyones when we go to Skye, but I expect you'll be away skiing or summat - I'll drop you a line when we've more of an idea about dates.

So what did I buy? 2 meters of clear plastic pipe. A bargain at £1!

Thought I'd nip in and see Davie & Helen on the way home, luckily I turned up just in time for tea! Then er, when I got home, Mrs BC had cooked up a fine meal of roast chicken and trimmings...

I really must sort out some new gloves, I've been meaning to look for some summer ones but considering I couldn't feel my hands for about an hour after getting home, I think perhaps I'll get another pair of warm winter ones!

Well, it's the Scottish classic club spring gathering on Sunday, and I hope to make it along but may have a logistical problem or two, then the next weekend is the wotcha call it - the VMCC relay rally thingy, and then....the following Sunday is the Cairn O Mount. If you haven't entered and you intend to do so, be warned there are no entries on the day this year so get onto www.gcmcc.co.uk and enter there.

On another note, I do believe little Timmy Hastings was in pole position for his race at Thruxton - wonder how he did. John and the crew from Bikeshite.com were also away racing, an endurance thing at Angelsey I think.

read a comment somewhere today about an up coming 330 breakdowns scottish tour .....lol
you wouldn't know anything about that would you BC ???