Yay hay, Graham B is back with another top tip to make your winter biking a bit safer and more enjoyable. You might remember Graham has a couple of books out about Improving Classic Motorcycles, and oddly, that's the title of one of them. Another in the GBC library is Magnetic Speedometer Repair, a most useful title if you need to dismantle, tweak and attempt to reassemble a speedo or anything else that goes round and round. Perhaps I should have read it before I took Cubbie's old speedo apart, chuckle.
You can pop along to www.lulu.com/product/paperback/improving-classic-motorcycles/12932659 to buy yourself that extra little Christmas pressie. Take it away Graham B....

VISOR MISTING AND HOW TO AVOID IT
Hopefully you’ve all equipped yourselves with a Vee Wipe to keep the outside of your visor clear in rain. But what about the inside of the visor and the constant battle with it misting up from your breath?

I’ve been riding year round for just short of 33 years now and have tried pretty much everything to stop misting up. My case is particularly tough because I wear contact lenses which require a well fitting visor that doesn’t let the wind in. When wearing contact lenses (well the hard type I use anyway) the slightest spec of dust that gets in your eye causes an “I’ve just been chopping up the strongest onions known to man” effect. The sort of dust that that would just make someone not wearing lenses blink a couple of times can have you struggling to see the road ahead.

Very rarely I wear glasses instead but I am very aware of the lens frames and feel
that glasses restrict my peripheral vision. So. A draft free visor is good at keeping rubbish out of your eyes and is also good at reducing wind noise and protecting your hearing. But it makes visor misting up worse. I tried a few of the solutions you apply to the inside of the visor but found that washing up liquid (the one that’s kind to your hands!) worked as well if not better. All of them wore off after one or two rides so it was a time consuming routine taking off the visor and retreating it every time I went out. They also gave a rainbow effect across the visor as breath settled on them. Not great.

I noticed that GBC’s equally gorgeous sister < was using a double-glazing type stick on internal sheet in the “Cubbie returns from Wales” blog. I have one still stuck to a visor from one of my long retired helmets. 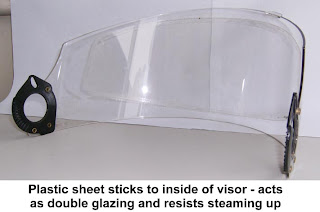 The idea is quite clever. A layer of air is trapped between the stick on sheet and the visor and they work just like double-glazed windows in that they don’t steam up as much. The seal around the periphery is critical so you have to apply them very carefully to an absolutely spotlessly clean visor. And it is a once only operation so make sure you get the positioning right first time. If that glued down peripheral seal is broken they stop working as well.

These may be your best bet if you wear glasses while riding. However they also suffer from the rainbow effect and the glued edge restricts peripheral vision. In some helmets, they may foul the visor seat rubber seal as the visor is opened and closed. They are not as scratch resistant as the visor itself and must be treated with care to avoid your view being marred by scratches.

Respro Foggy mask
So far the above treat the symptoms (breath landing on the visor) rather than effecting a cure. Stopping breath getting on the visor is in my experience the most effective method and for the last 15 years or so I’ve been using Respro Foggy masks also sometimes called a Breathguard. These are an after-market nose piece that traps breath below them and stops it reaching the visor. The visor stays clear and there are no peripheral vision problems. 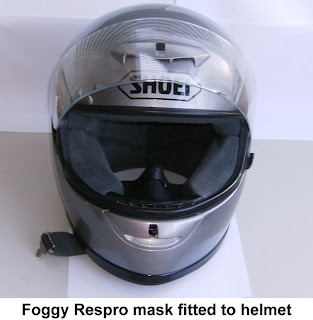 I must state that I have no connection with the manufacturer or anything to
gain by singing their praises. But in my view this a good solution to the visor
misting problem and thus a safety aid. It can’t be used on an open face helmet because there’s no chin piece to stick to. I found it difficult to use with glasses but you may have better luck than me if you persevere. Glasses sit on top of the nose piece and bounce up and down I’ve found – which is really distracting.

To say that it sticks like glue is an understatement! You must get it in the right place first go because there will be no second attempt. In removing it the glue is ripped apart and will never stick as well again. 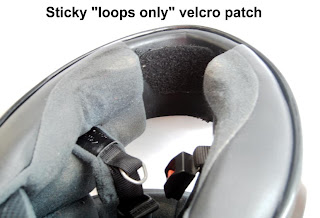 Spend a lot of time on the rehearsal before fitting the sticky patch and go look at yourself in the mirror with the helmet on with mask fitted. It should be a comfortable fit and easy to get the helmet on and off. When removing the helmet I find pulling the bridge of the nose piece forwards helps. Also look for gaps between the mask and your cheeks and adjust it so there are no gaps. The sticky velcro patch has loops whereas the three patches of velcro on the mask itself have hooks. These hooks cling really well to the fabric of the helmet’s cheek pads and the position of the sides of the mask can be fine tuned to give the best fit. I try to fit the mask so it follows the contours of the chin bar and cheek pads viewed from underneath so no breath gets past it. 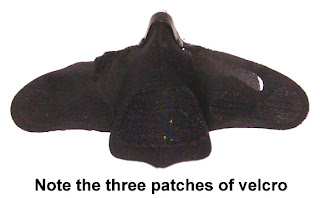 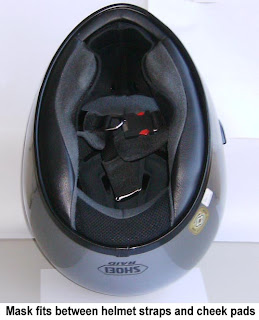 Maintenance consists of removing the mask and putting it in the washing machine when it gets cheesy (!) and buying a new one when it wears out. I’m about half way through my third one now.

Don’t buy anything other than the black one. I had a blue one first with a silver strip of metal that holds the curve over the bridge of the nose. This reflected annoyingly in the visor. I’ve also drawn over the maker’s (originally white) logo with black biro to stop it reflecting in the visor.

While we’re talking helmets, I have a chin cover that slips in between the helmet lining and shell. It’s remarkable how much warmer my chin is in winter with this little device fitted. 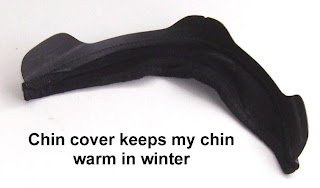 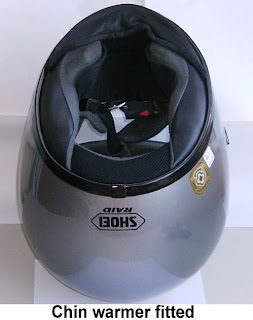 Finally – don’t scare people! With the Foggy mask fitted less of your face is visible and shopkeepers and garage staff are more likely to think you’re a customer who’s not intending to pay. I always remove my helmet even at the petrol station. I find without the helmet I’m more aware of my surroundings – useful when pumping explosive fuel. 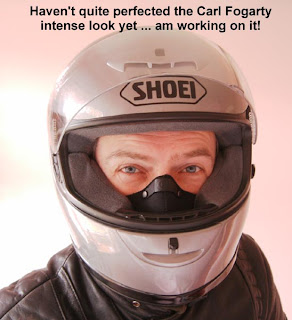 Posted by Gorgeous Biker Chick at 13:07

G. you've got a very long way to go before you get close to looking as mean and miserable as Mr. Foggarty. But then, why would he want to? For the money, maybe? P.s Isn't it Foggerty?

You mean there another small but perfectly formed un?